Multiple agencies have shaped the path to city’s crossroads 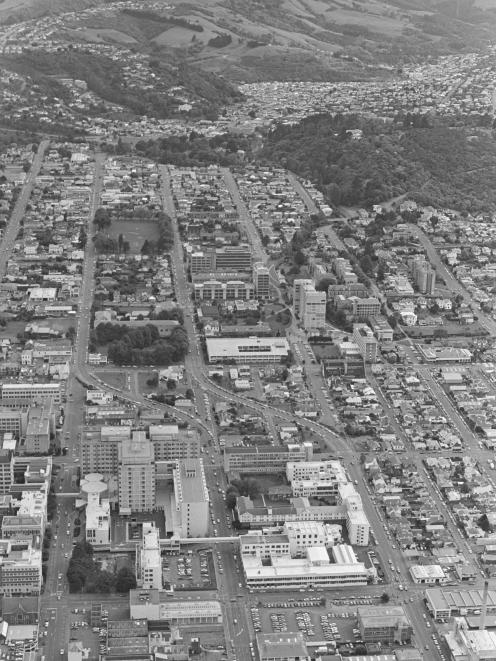 Photo:ODT files
Dunedin’s one-way system through the central city was introduced in 1970-71.

It has been much used since, but a series of reports have highlighted a lack of comfort about the impact.

A 2008 tertiary precinct plan produced for the Dunedin City Council, the University of Otago and Otago Polytechnic identified what was described as a hostile road environment created by the one-way pair, resulting in conflict between motor vehicles and pedestrians.

In 2013, the council’s integrated transport strategy commented the central city had a poor safety record.

The council’s 2015 central city plan promoted a vision of ‘‘a place focused on people’’.

‘‘It will be vibrant, safe and attractive, and a compelling destination to live, work, play, visit, learn and invest ... creating a quality street network and pedestrian experience ... The focus would be on creating safe, inclusive, welcoming streets where people want to spend their time.’’

In 2018, the Government announced the central city location for the planned new Dunedin Hospital.

Looming large there is State Highway 1 — both the northbound and southbound one-way routes — and SH88 for good measure.

The Ministry of Health asked Waka Kotahi NZ Transport Agency and the city council to look into changing the roading network.

The ministry recommended two-way roads around the hospital, as this could improve accessibility, connectivity, safety and amenity.

Construction of the hospital was expected to take 6-8 years, causing travel disruption, and this was presented as a chance to go beyond offsetting the impact to stimulating change in travel behaviour.

The city council, the Otago Regional Council and Waka Kotahi worked together to produce a package of projects known as Shaping Future Dunedin Transport.

The two councils backed their share of the programme in their long-term plans but, for a while, a question lingered: Does Waka Kotahi support retention of the one-way system in an upgraded form or will it back a two-way model?

In November last year, the transport agency’s board endorsed a business case that preferred the one-way system.

This prompted city councillors to debate, in a closed meeting in December, what their preferred position was.

In the end, a majority backed an alternative programme — one that would dump the one-way system — as the starting point for discussion.

As city councillor Jim O’Malley explained it recently, this was feeding back to Waka Kotahi that it had to do more than take into account transport and vehicle movements.

Or, as Cr Sophie Barker put it, the council issued a challenge to the transport agency.

Hi ODT team, are you able to do an article on why the current one way system was created in the 70's, including any public back lash and if it has worked as intended.