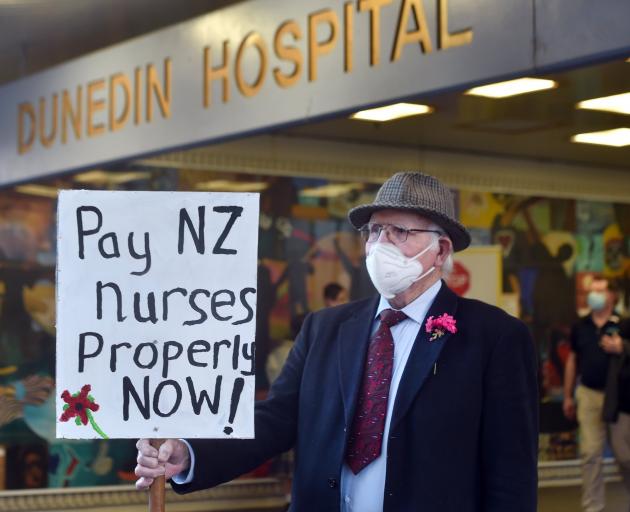 Jim Moffat has a clear message.

The 79-year-old said he was alive today thanks to the medical profession.

He was diagnosed with cancer and had major, life-saving surgery seven years ago.

"We mature people have to be active," Mr Moffat said.

"I thought I might be joined by some others but that hasn’t actually happened.

"But I have had tremendous feedback from nurses themselves."

Nurses were crossing the Tasman in search of better-paying jobs, Mr Moffat said.

"And we’ve got a new hospital going in ... and there won’t be any nurses."

The nurses union and the Public Service Association (PSA) had been negotiating with district health boards on achieving gender pay equity since 2018, and were due to put a settlement proposal to their members.

Instead, last month they ordered a full legal review of the proposed pay equity deal because of the backlash they received from members in response to the proposal.

Some nurses have said the settlement as proposed would deny them more than $20,000.

Health Minister Andrew Little told RNZ at the time the nurses’ union change of tack was a back-track on the pay settlement, and he called it "peculiar".

He said there was no more money to put into the deal.

Meanwhile, the PSA has since served the Southern District Health Board notice that from Monday next week until May 20 staff will follow work hours to the letter including no work after staff were scheduled to finish their shifts and stopping work to take all entitled breaks.

Further, for all of Monday, May 16, staff would strike and withdraw from work duties.

PSA DHB campaigns organiser Will Matthews, of Auckland, said the strike notices would affect more than 600 healthcare workers in the Southern DHB, excluding doctors and nurses.

"The Government is being exposed quite badly on its treatment of health workers across the whole sector at the moment," he said.

Well done Mr Moffatt. The Ministers of Health and Immigration between them are rapidly destroying our health service and certainly doing little to improve it - apart from some more working grouos and jobs for the bureaucrats.

Wooo there. Firstly please tell me what the last Nat govt did for health and in their 9 years what were the wage rises like??

Another factor none of you know - nurses aren't the only profession working in hospitals. While they get wage rises, other professions lose out, like Radiographers, Physios, Occupational Therapists, Lab techs, Dieticians and paramedics.