The South has reported no new cases of Covid-19 for three consecutive days for the first time since the outbreak began in the district.

The MoH confirmed for the third day in a row there were no new cases of the virus reported in the Southern District Health Board area.

An SDHB spokeswoman said today this was the first time there were no new cases reported for three consecutive days since the first case in the South was confirmed.

"Three days is the longest we have with no new cases notified since Covid-19 was first notified in our district."

The number of confirmed and probable cases in the South remains at 216.

The South is still the district health board area with the highest amount of confirmed and probable cases, followed by Waitemata DHB (212 cases), Auckland DHB (186 cases) and Waikato DHB (185 cases).

Dr Bloomfield also confirmed today that although there were still 12 people in hospital due to the virus, none of them were in a critical condition.

Three people, one each in Middlemore, North Shore and Dunedin hospitals, were in intensive care, he said.

An SDHB spokeswoman said this afternoon there was still one patient in Dunedin Hospital in a stable condition.

"They have been receiving care in our ICU for nearly two weeks," she said. 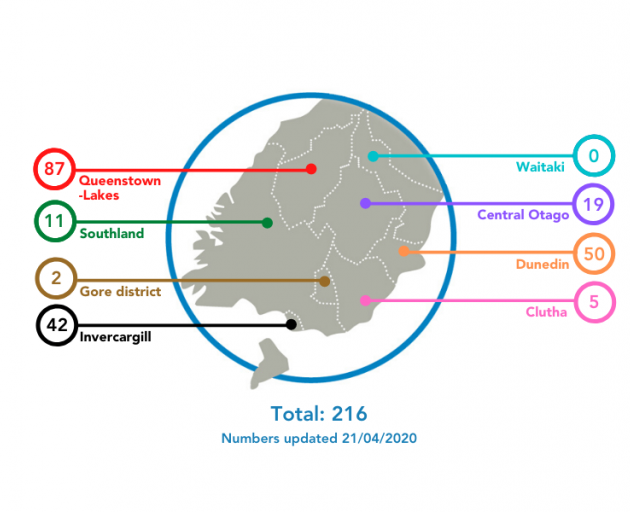 For three days in a row, no new cases of Covid-19 have been reported in the SDHB area. Image: Supplied

The Southern district has the fifth-highest amount of active cases at 36, behind Waikato (84 cases) , Waitemata (71 cases), Canterbury (63 cases) and Auckland (41 cases).

The South has the highest total number of recovered cases at 179, followed by Auckland (145 recoveries) and Waitemata (140 recoveries).

An Invercargill man in his 70s who died in his Kingswell home on Tuesday last week is the only reported fatality in the South.

A post-mortem confirmed the man was positive for Covid-19.

The man had links to the Bluff wedding cluster. His death is believed to be the first coronavirus-related death in New Zealand not in hospital.

The Bluff wedding cluster remains the largest of the 16 clusters in New Zealand.

In the last 24 hours two cases linked to this cluster were confirmed, bringing the total number of cases in the cluster to 98.

To date 61 people in the cluster have recovered.

There are still no new cases linked to the World Hereford Conference which was held in Queenstown and of the 39 cases in the cluster there have been 37 recoveries.

There are eight clusters that haven’t had a new case reported in the last seven days.