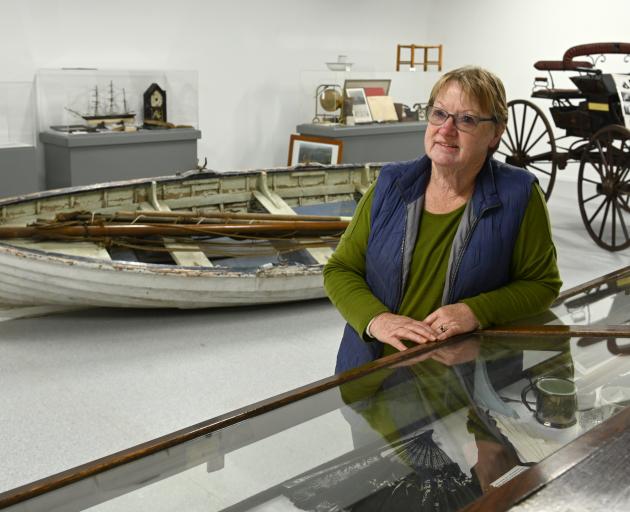 Waikouaiti District Museum Society chairwoman Shirley McKewen looks at the heritage collection inside the new building. PHOTO: LINDA ROBERTSON
A decade-long dream will become reality this week when a new extension to the Waikouaiti Coast Heritage Centre is opened to the public.

Ten years of hard work will be celebrated at Wednesday’s opening, which Waikouaiti District Museum Society chairwoman Shirley McKewen said was "the light at the end of a dark tunnel".

Tucked away behind the previous museum in Main Rd, the new climate-controlled building will be home to an extensive collection of items from Waikouaiti’s past.

The new building will also have a dedicated research space, a small information area and an artist/craft gallery, which will display and sell the work of local artists and crafts people.

Mrs McKewen said it had been a long and challenging process getting the project finished.

Fundraising difficulties contributed to the length of the project.

"We’ve had to do it as the funds became available."

It had cost about $750,000 to date, the money having been raised almost entirely thanks to the "hard work of a small dedicated band of volunteers".

A firewood fundraising business, using local volunteers to help cut and split logs, was just one of the many efforts.

The Christchurch and Kaikoura earthquakes, along with Covid-19 pandemic, created further disruptions to the project.

She was grateful to those in the local community who had made donations and the many volunteers who had given hours of their time, Mrs McKewen said.

She hoped Waikouaiti’s newest facility would attract more visitors to the area and create interest in local artists and crafts people.

The doors would be opened to the public at noon on Wednesday.