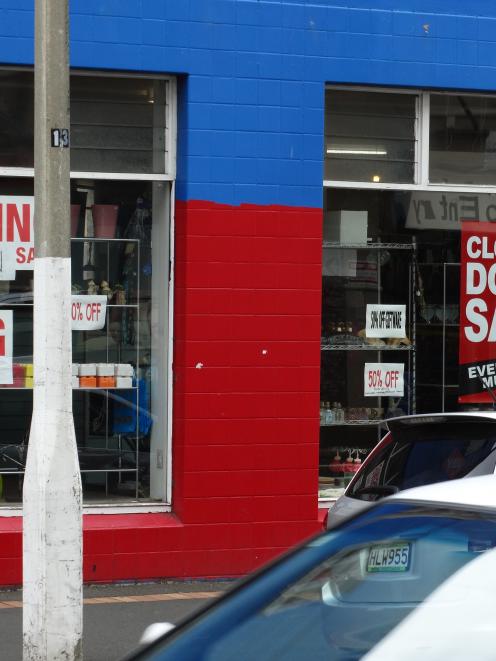 Photo by Jonathan Chilton-Towle.
Dunedin residents walking around the central city may have become accustomed to signs bearing words like ''Closing Down Sale'', or ''For Lease'' plastered across shop front windows. Star reporters Jonathan Chilton-Towle and Dan Hutchinson investigate why there are so many empty shops.

High rents, the residue of the global financial crisis, and increased online competition are making things tough for Dunedin retailers, as evidenced by a high number of empty storefronts around town.

On a brief walk around George St and the surrounding area this week, Star reporters counted 10 empty premises and one displaying a closing down sale sign.

Acquisitions managing director and Dunedin city councillor Richard Thomson said a lot of leases had come up for renewal lately and some businesses might have made the decision not to renew because their profits were too marginal.

High rental prices were a factor and Mr Thomson said an unrealistic rental price structure could be contributing to stores remaining empty.

Many businesses had taken a hammering to their profits during the global financial crisis of 2008 and had been holding on since then.

''I don't have a sense that rentals have decreased in that period,'' he said.

Mr Thomson believed landlords needed to adapt their rental expectations but did not think they were at that point yet because there were still high occupancy rates, especially in malls.

Online competition was also a factor and Mr Thomson believed the Government needed to do something about the unfair situation of overseas internet sales not being subject to GST.

Retailers were increasingly needing to rethink traditional models of doing business to succeed, he said.

Retail NZ chief executive Mark Johnston said retailing was tough all over the country at the moment.

''Some particular concerns we hear from our Dunedin members is that central city rents are becoming unaffordable and some landlords are not investing in the maintenance of retail premises.

''Improving the bus services and reducing the cost of parking would also make it easier for people to come into the city and do their shopping,'' he said.

Another factor was increasing competition from offshore online retailers.

''Part of the reason for this is that low-value purchases, generally goods worth under $400, do not attract GST or duty, which means we have an uneven playing field for local retailers. However, consumers are also moving online because of the range of goods available and the convenience of shopping from home,'' Mr Johnston said.

''Bricks and mortars retailers are constantly adapting to improve their service to customers.''

Bayleys Real Estate commercial sales and leasing Merrin Bath did not believe rents were over-inflated but she said it had been tough economic conditions for retailers for several years.

''The rents are all a factor of turnover, so when things are good and the economy is going well and people are spending money, the rent is not an issue. When people are not spending as much money, rent does become an issue,'' she said.

The other reason some shops might be empty is because retailers preferred large window frontage and roomy shops. In Dunedin, there were many older heritage buildings that were typically 100sq m to 150sq m and perhaps only 5m wide, she said.

Tenant inquiries had picked up recently but there were still quite a lot of retail spaces available in George St, she said.

Enterprise Dunedin director John Christie said he was not overly concerned about the number of empty shops.

However, if it became a trend over an extended period of time, the council would need to look into it and have conversations with stakeholders.

''It's not desirable to have a lot of empty shop fronts, but at the same time you've got to have some turnover in the retail sector,'' he said.