The latest liquidator’s report, released yesterday, revealed new details of just how empty Kloogh’s accounts were when the Serious Fraud Office raided his High St office and Dunedin home in May last year.

About $13,500 remains in the funds in hand of his two companies, Impact Enterprises Ltd and Financial Planning Ltd, with about $20,000 owed to preferential creditors — employee claims and the Inland Revenue Department.

Staring at a total loss are Kloogh’s general and trade creditors, who are owed $112,956, and the luckless investors whom Kloogh conned — the report estimates they lost more than $12million.

In July, Kloogh was imprisoned for eight years and 10 months on multiple theft and fraud charges, following an earlier guilty plea.

He has since lodged an appeal against the length of his sentence, which is due to be heard later this month.

The official assignee said there had not been any evidence found to date of transactions that might result in the recovery of funds.

"The liquidator is undertaking an accounting tracing exercise to determine how stolen funds were channelled through this company [FPL] and other entities and how they were used.

"This exercise involves multiple bank accounts and credit cards and involves this company, the related liquidation of IEL and the director’s personal accounts, over many years." 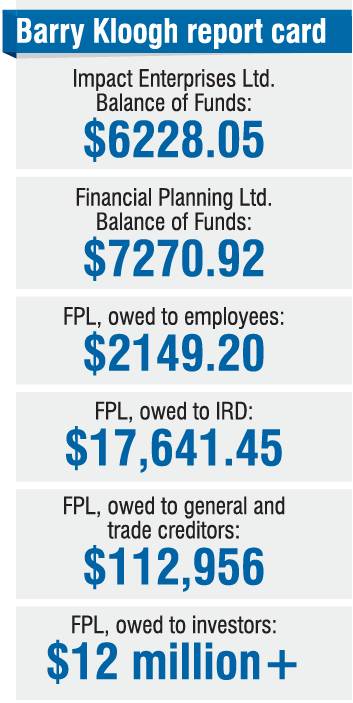 The sole pool of money liquidators have found so far is about $450,000, which the ODT understands are the proceeds from the sale of a house in Earnscleugh owned by two trusts associated with Kloogh.

Those funds have been frozen in a lawyer’s trust account until investigators untangle their status.

"These funds do not directly involve the company, but the liquidator in his role as official assignee in Mr Kloogh’s bankruptcy is investigating how these funds originated and what steps can be taken in dealing with them."

Liquidators have previously estimated investor losses as being at least $15.7million, but are still trying to understand the depth and breadth of Kloogh’s offending.

"It is estimated that the liquidation will take some time to complete due to the complexities and the effect of the fraud.

"It is not possible to indicate a date of completion at this time."

Kloogh conned hundreds of unsuspecting clients, who had no idea their trusted financial adviser had in fact been running a Ponzi scheme for years.

"In the previous report we concluded that where an external asset was shown in investors’ accounts, it represented funds stolen by the director, Mr Kloogh, and was not indicative of funds held which might be available either to the investors or to the liquidator.

"The liquidator remains of the same view."

Both IEL — a company which existed purely for Kloogh to use its bank accounts for fraud — and FPL were conduits for Kloogh’s criminal activity, the liquidators said.

Funds stolen by Kloogh included savings invested to care for a disabled child, and the estate of a man who died from cancer just days before the SFO shut down Kloogh’s businesses.

The liquidators estimated their costs so far as just over $93,000.