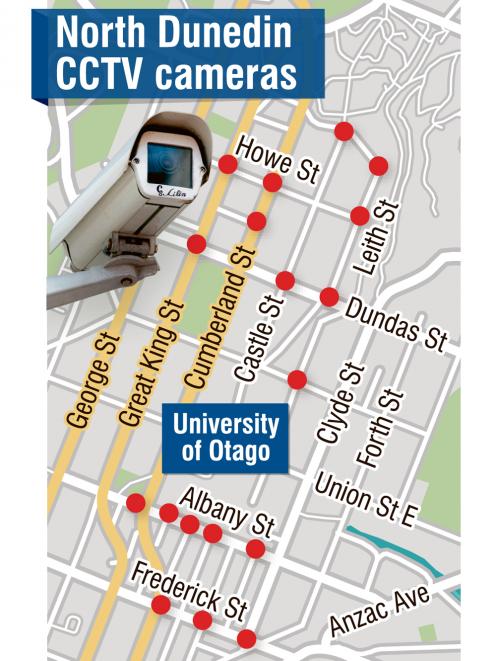 The University of Otago has begun to roll out extra surveillance for the student area. Two of its 26 new CCTV cameras are now operational.

The cameras were agreed upon last year and were originally scheduled to go up in 18 locations earlier this month.

A university spokeswoman said yesterday two cameras were now working. One is on the corner of St David and Leith Sts and other at the university link building facing west on to Albany St.

A camera on the Student Health building is expected to be installed next week, and more cameras on Leith St are due to go up today.

Camera feeds are sent to the Campus Watch control room, and footage is held for 30 days before being overwritten.

The cameras cannot be used to address ‘‘non-criminal student behaviour under the code of conduct’’ and footage can only be viewed by approved staff.

The spokeswoman said CCTV signs, informing residents cameras were operational, had been installed around Albany and Leith Sts and surrounding areas, but the process was not complete.

Cameras are being added in Albany, Frederick, Dundas, Howe, Castle and Leith Sts.

The university already has a CCTV network, with cameras on campus buildings, in residential colleges and in the Unipol gym. They had been used to reduce and deter criminal behaviour, and help to identify and prosecute offenders.

Students were included in consultation with the university on the extra cameras last year.

Adjustments were made after the consultation. The number of extra cameras and locations were reduced.

Otago University Students' Association president Caitlin Barlow-Groome said last month some students were still uneasy about the extra surveillance and did not feel consultation was sufficient.

I had a rethink about this, I now strongly disagree with the cameras. Sure if they are there to deter and record break-ins of buildings yep , but not to monitor people. those doing the monitoring what checks are on them, what auditing procedures do they have are USB's locked off to the general monitor. This seriously stinks of abuse of power, if Security cameras are needed then they are needed in all parts of the city and should be controlled by a nation government department