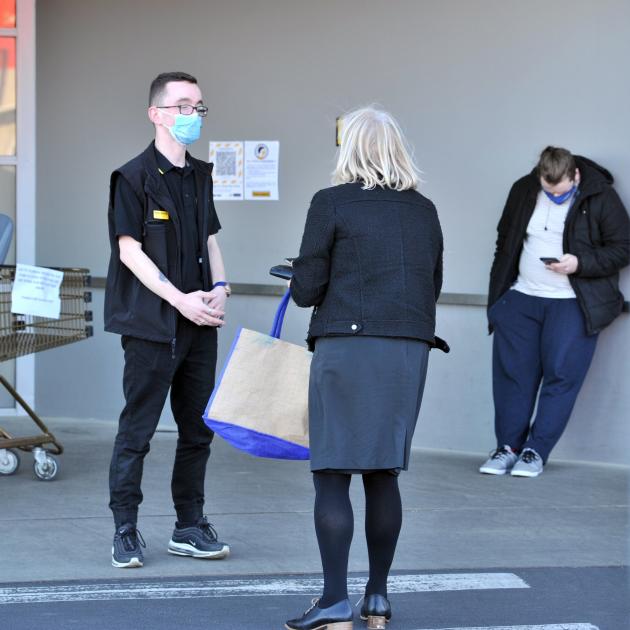 A customer at Pak'nSave is turned away after an IT issue forced the South Dunedin store to stop trading this afternoon. PHOTO CHRISTINE O'CONNOR
Supermarket shoppers were turned away from stores earlier today after "major IT issues" forced closures throughout the South Island.

Foodstuffs said the problem was due to routine maintenance gone wrong from 4pm for about two hours, and stores were operating again by 6.30pm.

Pak'nSave in Dunedin, New World Gardens and New World Temuka were among those forced to stop trading for a time.

Fendalton New World Christchurch was also closed due to the outage, but reopened about 6pm.

In a statement issued just after 6pm, Foodstuffs spokeswoman Antoinette Laird said the company apologised to customers and  confirmed it was not a cyber attack.

"At around 4pm this afternoon, a standard IT maintenance update was pushed through the system and inadvertently caused stability issues within South Island stores point of sale network. The issue has been identified and the team are carrying out an urgent fix.

"We would really like to apologise to customers who have been trying to shop during this time, we know the system being offline is an inconvenience, but rest assured we are working hard to get things online again as quickly as possible."

New World Temuka said on its Facebook page it was a widespread issue.

"We and other supermarket chains are experiencing major IT issues with our checkout computer systems. We have unfortunately had to close our doors as we cannot trade."

New World Gore told shoppers on social media just after 5pm it had also been forced to close, but said its systems were back up and running and it could reopen about 5.45pm.

A shopper at New World Gardens in Dunedin said before it closed there were significant delays for people in getting items through checkouts.

A Queenstown woman said shoppers at Pak'nSave were being told about the IT issues. Staff were offering to put items in a chiller for shoppers to collect later.

At New World in Queenstown, a security guard was telling customers the store was closed due to a South Island-wide issue.

Sure. Every IT person knows the ideal time to patch and update is at 4pm on production machines during peak demand. Tuis anyone?