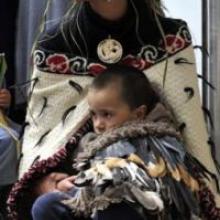 Te Whitu Rangi takes a break on the knee of his grandmother, April Mokomoko, of Moeraki. Photo by Gerard O'Brien.
There was no frippery about the feathers in a rare fashion parade at Otago Museum yesterday.

They featured in many of the more than 30 kakahu (capes) and korowai (cloaks) in contemporary and traditional design modelled before an audience of more than 100 on the last day of Mo Tatou: The Ngai Tahu Whanui Exhibition.

Those taking part relished the opportunity to show off garments not often seen.

She said it was a "different feeling altogether" from wearing any other clothing.

Some of the garments modelled were more than 100 years old.

Koa Whitau-Kean, of Moeraki, who organised the parade, said the garments were worn sometimes to weddings, other family celebrations and graduations, and could be draped on coffins as a sign of respect.

It was very unusual for them to be seen in such numbers.

The event was one in a special day to mark the closing day of the exhibition featuring 200 precious Ngai Tahu taonga which has been on the road for five years.

Yesterday, the museum had about 1200 visitors, bringing the total number of visitors during the exhibition's four-month Dunedin stay to more than 30,000.

During its five years, the exhibition has been seen by more than one million people.

A special closing ceremony attended by about 150 invited guests was held at the museum last evening.