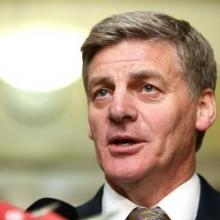 Prime Minister Bill English says the cost of land in central Dunedin will be a ''critical factor'' in whether Dunedin Hospital stays in the CBD.

His comments, in a letter sent to the Dunedin City Council, were described yesterday by Dunedin Mayor Dave Cull as ''concerning''.

''You could infer from that there's a possibility we can't afford a teaching hospital in the middle of the city anymore,'' Mr Cull said.

''That would be very, very regrettable, indeed catastrophic, actually.''

Mr English was responding to a February letter from the council. The council had resolved to ask the Government to ''remove from consideration'' a rebuild away from the hospital's current location.

Last week, the council launched the Dunedin Hospital SOS campaign. It is pushing to keep the facility as a teaching hospital in the central city after its planned rebuild.

The campaign was backed up this week by CBD retailers and building owners' group Heart of Dunedin. It said keeping hospital workers in the city was pivotal to its survival.

Mr English responded - in a March 20 letter released yesterday to the Otago Daily Times - the Southern Partnership Group was ''not at the point of having site-specific options''.

''Work to date has been focused on service design and models of care and potential locations will be able to be considered once space requirements have been identified.

''Of course, the availability and affordability of land in the central city will also be a critical factor,'' Mr English wrote.

Mr Cull said the hospital's location was not only important for the convenience of students, lecturers and doctors, it was ''critical for the wellbeing of the retail area''.

''More importantly, in the longer term, that teaching hospital, that med school connection is critical to the economic sustainability of Dunedin.''

A ''fair bit'' of the University of Otago's standing and reputation was in the area of medical sciences.

''The fact we've got it connected to the hospital makes it work.''

If the link was broken or the hospital downgraded, ''it's a downward spiral''.

Responding to Cr Mike Lord's suggestion earlier this week transport issues could be dealt with if the hospital and university were in different places, Mr Cull said the university was in the centre of the city, so the hospital had to be close by.

''If you're a teaching doctor and you've got to leave your hospital rounds to go and lecture, or go back into the operating theatre after lecturing or whatever, you don't want to get on a bus to do it.

The council wanted to find out what was needed in a teaching hospital for ''the continuing viability of the Dunedin economy''.

''It appears the criteria around the placement of the hospital are overly financial.''

If the government want to do a fundraiser to buy extra land in central city they could sell off some of the Wakari Hospital extensive gardens.

Interesting that the government can afford central city land for the ACC building.

The truth slowly comes out. Mr English, the great paragon of the South, is showing his true colours. Neither he nor the rest of the government give a rats about Dunedin.

The failure of the government to release the plans for the hospital redevelopment until after the election is nothing short of insulting to Dunedin.

Interesting that those currently in dunedin local government, mayor cull, and most of the people who are campaigning for the hospital to stay in the central city have similar political leanings (left) to many other politicians country wide who also think the right thing to do is cram everybody into highrises and create congestion within already crowded cities. Why did the people of Dunedin not vote this lot out last election I just don't know, but this anti business, anti urban sprawl mumbo jumbo is ridiculous. Why not let the city spread and grow ?

Surely a better hospital could be built at lower cost if was built from scratch somewhere already vacant.
I'm sure someone on council has a brother with a bit of spare industrial land they can sell to Dunedin at a bargain price (lol).

Also Mr Cull, please name one teaching doctor in Dunedin who uses a bus daily to get to work, you are kidding right ?

Well instead of funneling the money for jafa projects why not send it this way instead as we need it a hell of a lot more than that city does, and if you move the hospital it will cripple us. I've lived in Dunedin all my life and the city just wouldnt be the same without the hospital there.

This shows how short sighted we can be. Bill stop being a cost accountant and start being a Prime Minister, a Prime Minister is a Leader and a Leader can see the benefits far into the future of keeping where all the other faculties are where it is.