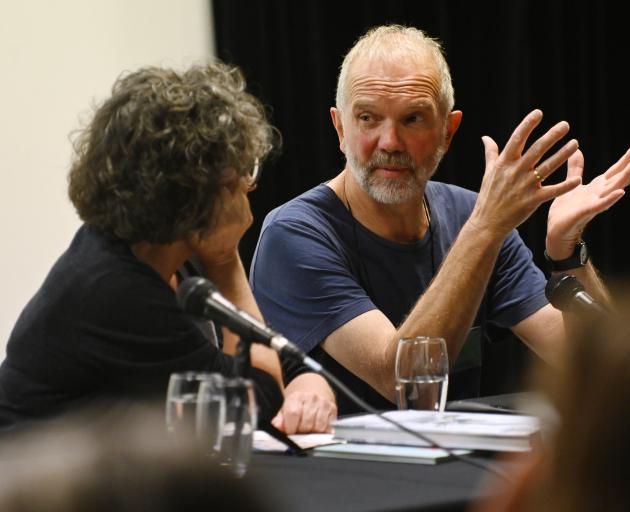 Port Chalmers illustrator and author David Elliot was centre stage in a Saturday morning conversation with author Kate de Goldi, a keynote event in Wild Imaginings, a national children's writers and illustrators hui, held in Dunedin over the weekend.

Many of Mr Elliot's drawings and paintings have featured animals, reflecting a love of creatures which stemmed from a boyhood desire to be a vet.

With exam results dictating a change in career plans, Mr Elliot ended up at design school in Wellington.

His love of animals, and interest in people, grew during a period living overseas, which included a stint working at Edinburgh Zoo.

"I was intrigued with the animals, but not only the animals but also the keepers, who were really weird.

"They say owners look like their dogs, the keepers looked like the animals they looked after; the guy who looked after the lions had a kind of big hairy mane."

While there Mr Elliott started making Plasticine models of the animals; he had since brought the same technique of developing an image through application of layers, to his artwork.

Now a full-time writer and artist, Mr Elliot has worked with authors as diverse as Margaret Mahy, Joy Cowley, Brian Jacques and Jack Lasenby, as well as illustrating Janet Frame's sole children's book Mona Minum and the Smell of the Sun.

"You always need to find a way in to another author's work, and the one thing that really got to me with Mona Minum was that Janet was always talking about `that chemical smell' in the story," Mr Elliot said.

"For me, that is represented by the scratchy marks in the illustrations ... I know that I was doing that, probably no-one else does, but there is the reason why those are there."

Other writers and illustrators who featured in the three-day event included Fifi Colston, Rachel Stedman, Barbara Else and Stacy Gregg.