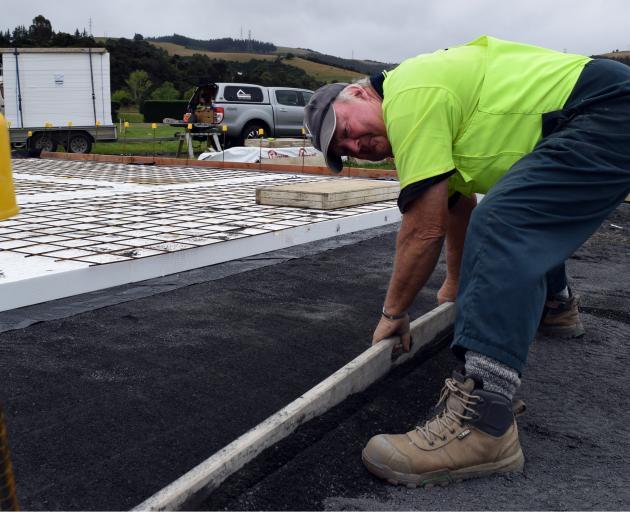 Since then the average floor area in Dunedin peaked at nearly 190sqm in 2016 and fell to about 172sqm last year.

A plumber and a builder working at the Balmoral Estate subdivision in Outram last week shared their views on reasons for new homes getting smaller.

Ken Cookson Builder owner Ken Cookson is building a 386sqm home for himself in the subdivision.

He was planning to retire in the four-bedroom home, which lies on a ‘‘quarter-acre’’ section, about 1000sqm.

Developers subdividing land into smaller blocks was resulting in smaller houses being built, he said.

‘‘Developers don’t want to make them too big, because people are cutting them in half.’’

Another factor was the rise in popularity of new townhouses in Mosgiel, which would reduce the average floor area.

Many townhouses were being built on land which was once part of a larger property, he said.

‘‘I think it’s wrong. Some of these grand homes built in the 1940s and ’50s are getting a townhouse built in front of them. I don’t like to see that happening.’’

When finished, the home would have 211sqm of floor space.

He believed the hot demand for land to build homes was a factor reducing the size of new homes.

‘‘So many people want to come and live in Dunedin.’’

Consequently, land prices were increasing, reducing the size of the house which people could afford to build.

Compliance costs and building materials were also more expensive, which could be forcing people to build smaller houses, he said.

Any available land in Dunedin was being ‘‘snapped up straight away’’.

People were subdividing land in the outskirts of the greater Dunedin area, such as Taieri Mouth, because of a lack of land closer to the city.

Anecdotally, the most popular type of new housing in Dunedin in the past decade is a stand-alone building on a 700sqm to 900sqm section in Mosgiel.

However, Stats NZ data on the average floor area did not reveal a trend in the city, he said.

‘‘The trend out there is to put relatively large houses on relatively small sections.’’

The average floor area would be brought down by people subdividing a property to build a smaller dwelling, such as a townhouse, he said.

New residential apartments were popular in Dunedin and would reduce the average.

Stats NZ statistics manager Melissa McKenzie said nationally the average floor areas of new homes consented in 2019 was about 21% [42sqm] smaller than the peak of 200sqm in 2010.

Stand-alone houses accounted for most new homes in New Zealand but other types of residential buildings, such as townhouses, apartments and retirement village units, were contributing to smaller average floor areas.

Over the 10-year period, the size of new homes decreased in all regions except for Northland and Marlborough.