By John Lewis
1 Comment
The sound of bagpipes at close quarters is not everyone’s cup of tea, and so to avoid putting his neighbours in a riotous jig with noise complaints, Ashley Honeywell has taken to practising on the edge of the Dunedin Town Belt.

The 26-year-old is a member of the City of Dunedin Pipe Band, but the lockdown restrictions mean he has not been able to access the band’s rehearsal hall, where he usually practises.

So every day, about lunchtime, he has marched out of his front door to a nearby patch of grass on the corner of Duchess Ave and Queens Dr, in Roslyn, and has done his practice there.

“I live in a four-apartment building, opposite the Town Belt.

“The way I figure it, it’s better to practise in the park than in my ground-floor apartment underneath everyone’s feet.” 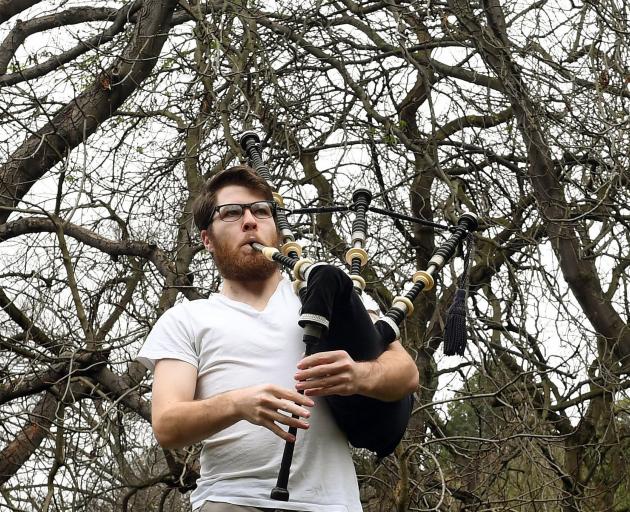 Bagpiper Ashley Honeywell’s rehearsals on the edge of the Dunedin Town Belt have been attracting appreciative audiences during lockdown. PHOTO: STEPHEN JAQUIERY
He was working hard to get in shape for the pipe band competition season, which was due to begin in November, Mr Honeywell said.

“Bagpipes are very much a maintenance-required instrument.

Much to his joy, his playing has started to attract audiences.

“Where I am is a really popular spot for walkers on Queens Dr.

“A lot of people quite often stop with their dogs or the bubbles of people that they’re walking with,’’ he said.

“I’ve been getting a few cheers and some applause, and people have been stopping to take pictures and video.”

It was quite good for his morale.

“It’s nice to see people getting some enjoyment out of it. Things like the bagpipes aren’t everyone’s cup of tea, so you may as well get a bit of enjoyment from sharing it around.”

Put out a hat, may as well collect some change for your efforts.....