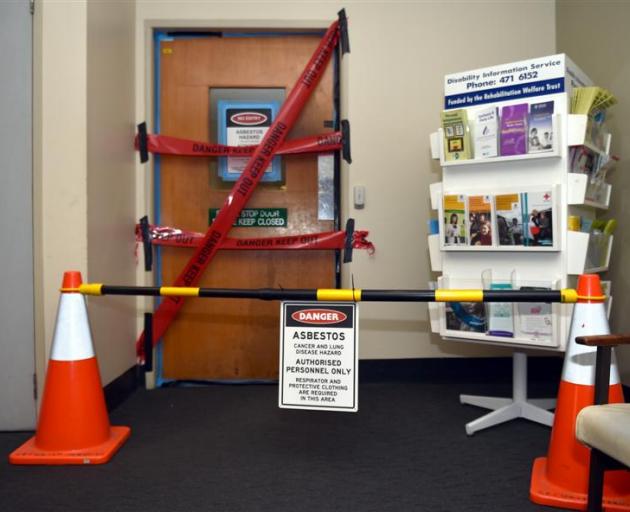 A taped-off stairwell at Dunedin Hospital yesterday. Photo by Gregor Richardson
Staff at Dunedin Hospital are nervous in the wake of the clinical services building asbestos scare, and want to know the cause of the contamination, health multi-union spokeswoman Deborah Powell says. 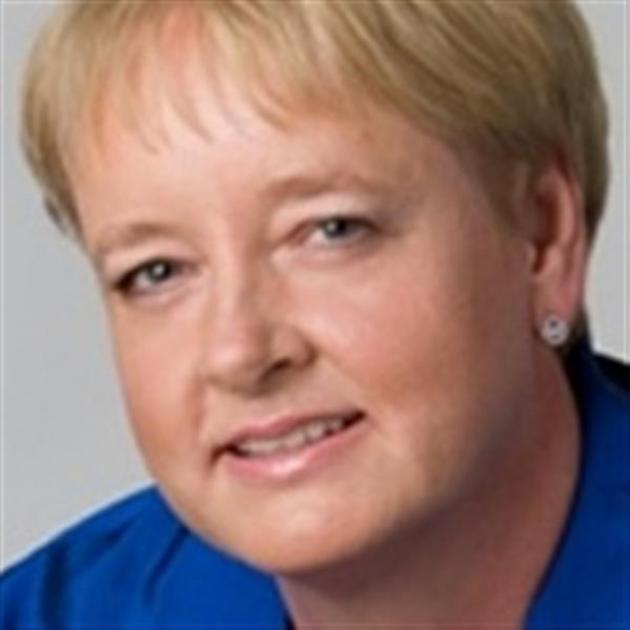 Cleaning asbestos-affected parts of the clinical services building began yesterday, after numerous areas tested positive for asbestos and had to be closed.

It emerged yesterday that two lifts had also been shut until further notice because of concerns asbestos in a plant room on the sixth floor could spread into lift shafts.

The entire building had now been tested, and no additional positive results had been returned, which was good news, the Southern District Health Board said.

However, it decided to extend the decontamination of the central stairwell to the sixth floor, instead of only to the second floor.

This meant the stairwell would be out of bounds for up to six days.

The board has since explained that the decision was made to undertake cleaning of the whole stairwell as one project.

The scare forced the cancellation of elective ultrasound, but molecular pathology testing is being carried out in Christchurch.

The board said progress had been made on cleaning the ultrasound suite, and staff were organising for the resumption of the service next week.

Asked if pregnant women who had visited the ultrasound department would be formally notified, a board spokeswoman said no.

''Pregnant women are not considered to be at any greater risk than the rest of the population,'' she said.

In a statement, board commissioner Kathy Grant and chief executive Carole Heatly thanked the public and staff for ''putting up with the inconvenience''.

''I would also like to acknowledge the many staff and contractors who have been working around the clock to minimise the disruption for patients,'' Mrs Grant said.

Asked about determining the source of the contamination, a spokeswoman said the focus was decontamination and making the areas safe.

Speaking on behalf of radiographers, laboratory workers, radiology stenographers, mortuary technicians, and radiology registrars, Dr Powell said she wanted the board to find the source of the contamination.

''Because we still don't know what that was and that is making people quite nervous.

''Is it still out there?

''The staff are anxious ... it's pretty hard when you can't give any definitive answers.''

Dr Powell took issue with the board for describing molecular pathology tests as non-urgent.

''If you have got cervical cancer you would probably consider it slightly more urgent than they obviously do, because that's the sort of thing that they diagnose.''

Molecular pathology samples are being analysed in Christchurch during the asbestos scare, which slowed down the results.

A temporary facility was still being organised, he said.

''From families' point of view it shouldn't make any difference to them ... I don't think there will be any effect on the public.''

A Ministry of Health spokesman said senior officials were supporting the health board.

''Ongoing technical expertise and support is being made available, and there are two ministry liaison officers currently in Dunedin working with the incident management team.''

Asked if the ministry kept a register of asbestos-affected hospitals, the spokesman said WorkSafe New Zealand was legislatively responsible for workplace asbestos.

Dunedin North MP David Clark called on Health Minister Jonathan Coleman to set up a register for people who believed they may have been exposed to asbestos at Dunedin Hospital.

''Officials can't rule out that patients and staff haven't come into contact with asbestos.

''Recording the details of anyone who believes they may have been exposed and guaranteeing follow up monitoring would at least provide some reassurance,'' Dr Clark said.

Dr Coleman is unavailable for comment as he is on his way to the United Kingdom for the Rugby World Cup and other official business.

•Cleaning involves using special vacuum cleaners, wiping all surfaces with sticky wipes followed by a wet wipe to ensure there are no traces of asbestos remaining.