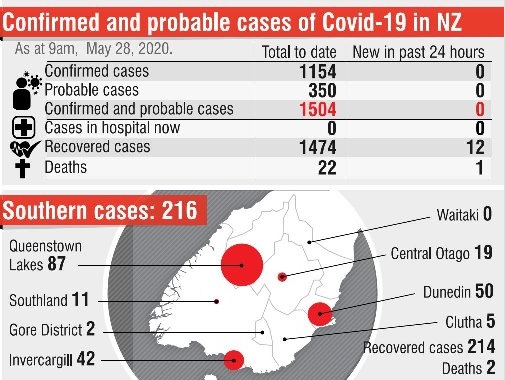 The South Island has no active cases of Covid-19, the Ministry of Health has confirmed.

However the nation’s death toll from the virus rose by one to 22, after the death of 96-year-old Auckland woman Eileen Hunter, a resident at St Margaret's rest-home,was deemed as Covid-related.

Director general of health Ashley Bloomfield said she had been confirmed as having Covid-19 in April and had recovered in hospital and had two negative test results since then.

Health officials believed she had recovered from the virus.

Dr Bloomfield yesterday announced there were no new cases of the virus reported nationally, for the sixth successive day.

He also announced 12 more people had recovered from the virus, bringing the total number of active cases in New Zealand to eight.

Those eight cases were in the Auckland, Counties Manukau and Waitemata DHB areas.

During the outbreak, the South Island has been home to some of New Zealand's largest and most deadly clusters of Covid-19.

Five of the nation's 16 significant clusters were in the South Island.

A wedding in Bluff was the source of the country's largest cluster of 98 cases.

The World Hereford Conference in Queenstown was linked to 39 cases.

There were also clusters at two separate aged residential care facilities in Christchurch, one linked to 56 cases and another linked to 19 cases.

The fifth cluster was linked to 14 cases in a community in Christchurch.

Although the Ministry of Health still has those clusters labelled as ‘‘open’’, there were no longer active cases linked to any of them nationwide.

The Rosewood Rest Home cluster in Christchurch, which was connected to the deaths of 12 people, was the most deadly cluster in the country.