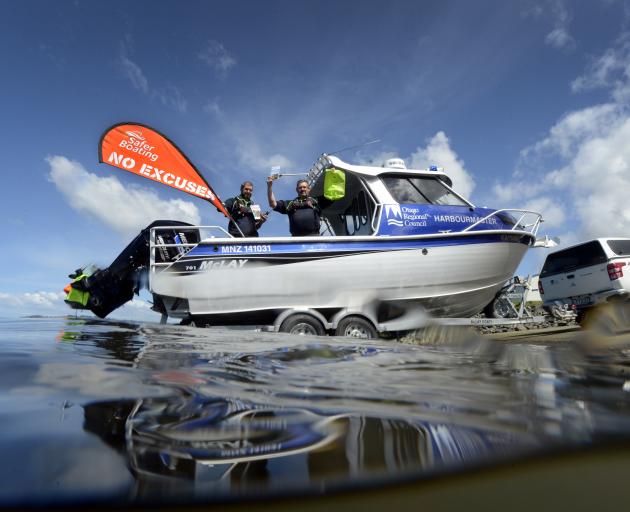 Otago Regional Council harbourmaster Steve Rushbrook (right ) and his deputy, Pete Dryden, are ready to launch Maritime New Zealand's "No Excuses" campaign in Otago in the coming days.PHOTO: GERARD O'BRIEN
A campaign aimed at improving safety on the water is coming back to Otago Harbour.

The "No Excuses" campaign, run by Maritime New Zealand with harbourmasters across the country, is restarting in Otago within days.

In Dunedin, Otago Regional Council harbourmaster Steve Rushbrook and deputy Peter Dryden will take to the water alongside maritime officers, to focus on boaties not carrying or wearing life jackets.

The initiative was being rolled out across the country, involving a record 18 harbourmasters this year.

Those who break the rules could face infringement notices of up to $300.

Despite the warning, Maritime NZ deputy director Sharyn Forsyth, who is also the chairwoman of Safer Boating Forum, said she was encouraged to see the "marked" improvement in water safety in Dunedin over the past two years.

That included the appointment of an ORC harbourmaster and deputy harbourmaster, buying a harbourmaster's vessel and the introduction of new bylaws and a safety improvement programme on Otago Harbour.

"Otago Regional Council has made perhaps the most rapid advances of anywhere in New Zealand, after so many years without a harbourmaster [in Dunedin]," she said.

The No Excuses campaign, which is funded by Maritime NZ, focused on life jackets because up to two-thirds of the recreational boaties who had drowned "might have been saved if they ... [had at the time been wearing appropriate] life jackets", she said.

Otago's bylaws required people to wear a life jacket at all times, unless the skipper indicated they could take them off.

Even then, there must be enough appropriately sized life jackets on board for everyone on the boat, she said.

The campaign also aimed to promote other safety messages, including advice to carry at least two waterproof ways of calling for help, to check the marine weather forecast, avoid alcohol and be a responsible skipper.

"There are no excuses for breaking the rules and causing risk to yourself and others," Ms Forsyth said.