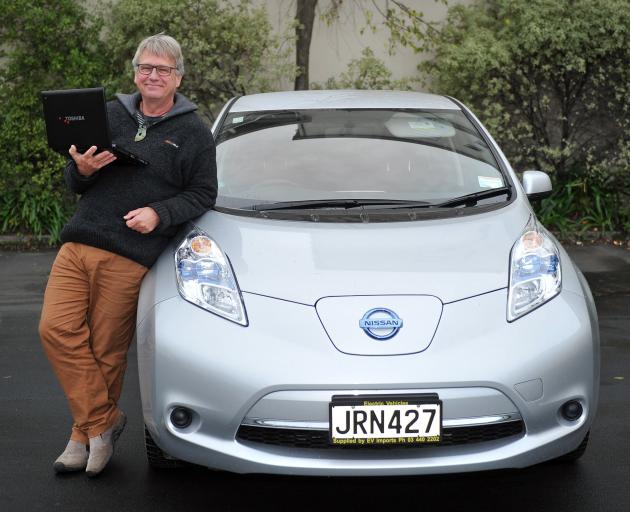 Henrik Moller with his Nissan Leaf. Photo: ODT
The New Zealand Transport Agency is safety testing the Nissan Leaf this week amid concerns its electric braking system could be failing.

There have been more than 50 reports of brake failures in the popular electric car in the United States and the United Kingdom.

Dunedin man Henrik Moller, of the Kiwi electric car advocacy website Flip the Fleet, said at least five cars had brake issues here, including his own.

"I was going very slow, I'd just pulled out and was in a lovely wide road with no one else around.

"But I appeared to have almost complete brake failure, maybe a bit of grab at the bottom of the pedal.

"It's a bit hard to remember all of the details when you're in a bit of a fright situation."

Flip the Fleet issued a report about the car last week, warning drivers about the potential brake failure.

An NZTA spokesperson said it had raised concerns with Nissan and had been assured there were no recalls or service campaigns being undertaken.

"We're aware of the concerns relating to the incidents highlighted by Flip the Fleet, and we are investigating them.

"This will include a trial of Nissan Leaf brake systems in the coming week.

"We are aware of a voluntary service and recall campaign for Nissan Leaf … vehicles in parts of the US and Canada, and the European Nordic countries, where vehicles were being operated in consistently cold conditions of minus 20 Celsius. This issue was resolved by Nissan."

Mr Moller said Nissan needed to investigate the issue further, because brake issues in New Zealand sounded like the same ones happening abroad.

"If Nissan are suggesting it's just something to do with -20 degrees, then they're in complete denial."

NZTA encouraged Leaf owners to take their cars to a dealer for testing if there were any concerns.