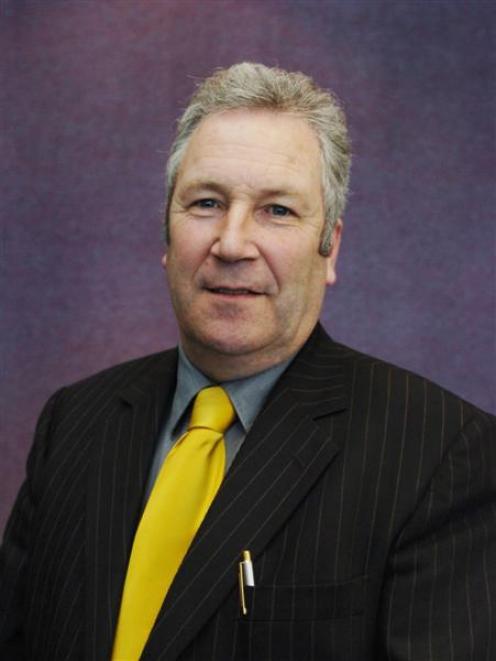 Stephen Cairns
Two Otago regional councillors have questioned the appropriateness of chairman Stephen Cairns carrying out both chairmanship and real estate roles, in a process a third councillor later called a "kangaroo court" while another dubbed it "despicable".

The questions from Crs Bryan Scott and Gerry Eckhoff at yesterday's full council meeting prompted Mr Cairns to stand down from chairing the meeting and ask deputy Stephen Woodhead to take his place.

Cr Scott asked the council to exclude the public during discussions on "governance" issues he and Cr Eckhoff wanted to raise, but declined to give further information to councillors in public.

Mr Cairns, a commercial valuer and property developer, said the fact the councillors had not had the courtesy to raise the issue with him before the meeting left him facing a "complete ambush".

"It wasn't about governance; it was about a conflict of interest," he said after the meeting.

It would have been more appropriate to raise those concerns when he was appointed five years ago, he said.

"It's the first time I've ever heard somebody say I can't do both."

Other councillors expressed concern about the actions of the two councillors.

"I do not appreciate it being dumped on us, like this, without any knowledge," Cr Louise Croot said.

Mr Cairns called a recess while he, Cr Woodhead and senior staff considered the paper the two councillors wanted to present, before deciding there was not enough information to exclude the public.

Mr Cairns vacated the chairman's seat and the full council was provided with copies of the two councillors' concerns.

Cr Scott said he tabled the questions, including "Is the position of ORC chair being compromised?", for genuine reasons and wanted a written reply to those questions by an agreed date, preferably before the next committee meeting.

If councillors required further clarification, he had further questions which might lead to more "insight", but he would table those only in-committee, Cr Scott said.

Other questions in the paper about why the council was repeating the mistakes it made in relation to the harbourside building had been allayed by an earlier discussion, he said.

Cr Eckhoff said the paper resulted from a desire to see or feel some confidence about the future direction of the council, especially in relation to major projects such as the new building.

However, he did not dispute the issue might have been better handled.

He had raised concerns with the chief executive in the past about perceived conflicts of interest relating to Mr Cairns.

Cr Duncan Butcher said it was "despicable" the pair had brought the matter of a person's integrity into public that way.

"Mr Cairns should be apologised to by the two councillors immediately."

The pair had chosen a path "so obtuse" and used "secrecy" to get the matter on the agenda, he said.

"I do not think this is the right process for an issue of this severity and degree."

Cr Gretchen Robertson said Mr Cairns had the right to employment outside the chairmanship role and had always acted responsibly, seeking advice from the auditor-general when needed.

"We are lucky he has the skills he has. This is not a fair process. There is no evidence before us."

Cr David Shepherd said he was uncomfortable with what was being asked.

After the meeting, Cr Woodhead said he was disgusted Mr Cairns had been "ambushed by a kangaroo court".

The two councillors had opportunities to explain their concerns before the meeting, but did not, leaving the council no option but to debate it in public, he said.

"I'm deeply embarrassed the Otago Regional Council has been dragged into the gutter this way."

It was now up to Crs Scott and Eckhoff to follow the official council procedure for such concerns, he said.