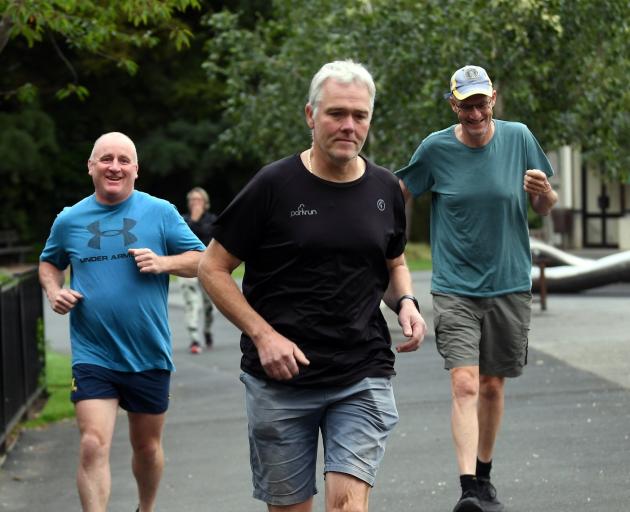 What run? Although the popular weekly Parkrun has been cancelled because of Covid-19, several runners took part in a ‘‘non’’ Parkrun at the Dunedin Botanic Garden on Saturday. PHOTO: STEPHEN JAQUIERY
Hobbled by a stoush over how to apply vaccine passports, a popular weekly run at the Dunedin Botanic Garden has been stymied since the Covid-19 lockdown in August last year.

Parkrun is an international network of organised 5km runs which take place on Saturday mornings, organised by volunteers.

Despite the official event being cancelled, members of the Parkrun group have been showing up each week to run together in an informal capacity.

Roger, who declined to give his surname, ran last Saturday.

He said the weekly Parkrun was a "fun community event" which connected people together, and was the sole occasion each week his 76-year-old father-in-law got to interact with other people.

For most participants Parkrun events were not about being competitive but more about a sense of camaraderie and participation: some walked the 5km circuit, and others went for coffee together afterwards.

The Parkrun community often had dress-up days, including Christmas, tutus and Star Wars themes, but because the official event was cancelled so were the costumes.

There were 28 Parkrun events in New Zealand, and they were all going apart from the one in Dunedin, Roger said.

The DCC rejected this as breaching Covid regulations, and advice from SportNZ validated the DCC’s approach.

The DCC recognised passes should be checked at the beginning of each event.

Mr Pickford said the council was aware that informal runs continued despite the organisers’ decision to pause official Parkruns.

It is expected the event will not continue in an organised capacity under Red traffic light settings due to participants sometimes numbering more than 100.

Discussions with the organisers about restarting the event under Orange traffic light settings were "very positive", he said.

Parkrun Asia-Pacific region marketing and communications manager Scott Trickett said Parkrun worked to resolve any issues so events could be as open as possible, he said.