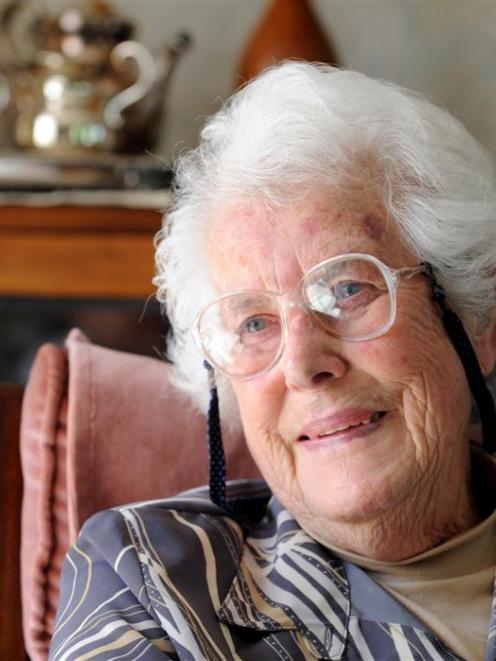 Peace Crawford, who was born on Armistice Day, will celebrate her 90th birthday today.
It was 'the war to end all wars' and the celebrations on Armistice Day were monumental.

So, when a baby was born in Tapanui in 1918 on the 11th day of the 11th month her parents decided there would be no better name for her than Peace.

Today, Peace Crawford will celebrate not only the 90th anniversary of the end of World War 1, but also her 90th birthday.

Mrs Crawford, who now lives in Mosgiel, grew up in Edievale, West Otago, where she was always remembered as the girl who was born on Armistice Day and blessed with the name Peace Edna Eileen Towne.

"I went to a little school where every Armistice Day we had to stand around the flagpole and sing God Save the King. Armistice Day was always a very special day, but I would get very embarrassed because the teacher would say 'And it's your birthday, Peace'.

"In fact, Mrs Crawford tried throughout her life to get people to stop calling her Peace.

"I was always extremely shy and I hated the comments. It always engendered a discussion on the story behind my name which meant everyone knew how old I was.

"People thought it was a marvellous thing to be born on Armistice Day - it was a day that was respected. Although I think people have lost all respect for things military."

When she went to Australia with her late husband, Kenneth, she asked that he call her Edna, her middle name, which left him horribly confused.

Recently, she has started accepting both Edna and Peace but prefers "Grannie" as grandmother to 17 grandchildren and 29 great-grandchildren, including one who has been given her name as a second name.

Millie Peace McKenzie, her 25th great-grandchild, will be 2 in May.

As for celebrating her birthday, Mrs Crawford said birthday celebrations were never that big in her family.

However, on Sunday she travelled with many of her grandchildren and great-grandchildren to Lawrence where they placed plaques on the graves of her husband's ancestors.

Today, Armistice Day, she hopes like many others that people will remember.

• In Dunedin at 11am, the Robbie Burns cannon in the Octagon and two other field guns, in Queens Gardens and Mornington's Unity Park, will fire simultaneously to call residents citywide to observe the two minutes' silence.

A service will then be held at the Cenotaph.

The Cenotaph service will be broadcast live on Channel 9 from 10.45am.

This will be followed at 6.30pm by a guided tour of war graves at the Northern Cemetery.