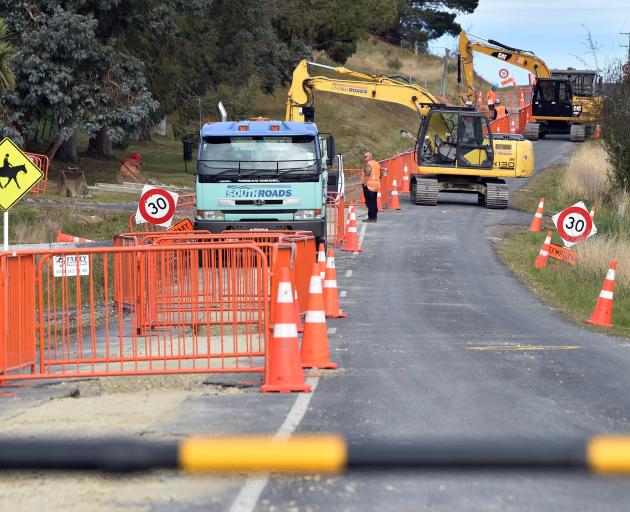 Construction crews work on the installation of a new water pipeline in Waikouaiti. PHOTO: PETER MCINTOSH
East Otago residents affected by lead in their drinking water can expect to be able to use their piped water supply by the end of June.

Work to replace the old cast iron pipeline was progressing well, with about 60% of the work completed.

That work is scheduled to be completed by the end of June, meaning residents of Waikouaiti, Karitane and Hawksbury Village would be able to use the water supply safely then, he said.

Some smaller pipes in side streets were initially being laid out in the open on the ground to provide quick connections, but those would be buried in July.

Residents have been using water brought in by tanker to temporary plastic tanks since the council in early February disclosed the elevated lead levels in the water supply.

Residents yesterday said they had largely adjusted to collecting water from the tanks.

Most of those spoken to in Waikouaiti were not worried about having to collect water for a while longer.

Golden Fleece Hotel and Motel manager Gerald Cayford said it was generally "a bit of a mission for people", but they had "probably" got used to it.

Waikouaiti School principal Mark Edwards was satisfied with the school’s access to the tank water supply.

"We’ve had a 5000-litre tank dropped on the school grounds which has made it much better."

Many parents had been collecting their water from that tank when they dropped their children off at school.

One older resident, who declined to be named, said her son-in-law had been collecting water for her to use.

"I’ve got fresh water and that’s all that matters," she said.

Waikouaiti Coast Community Board chairman Alasdair Morrison said there had been one benefit from using the water supply provided in the tanks.

"The water they’re getting is nicer than what they are used to getting from the pipes."

Many campers brought their own water and the council had also installed a water tank at the camp ground for guests to use.

Only one person spoken to dissented.

Colin Butler said it was "a bloody nuisance because you’ve got to go and collect water and boil it".

He was not looking forward to having to collect water when colder weather arrived.

Mr Dyer said an online lead monitor, which provided test results every 20 minutes and would be part of the new water infrastructure in the area, had arrived from Belgium and was being calibrated.