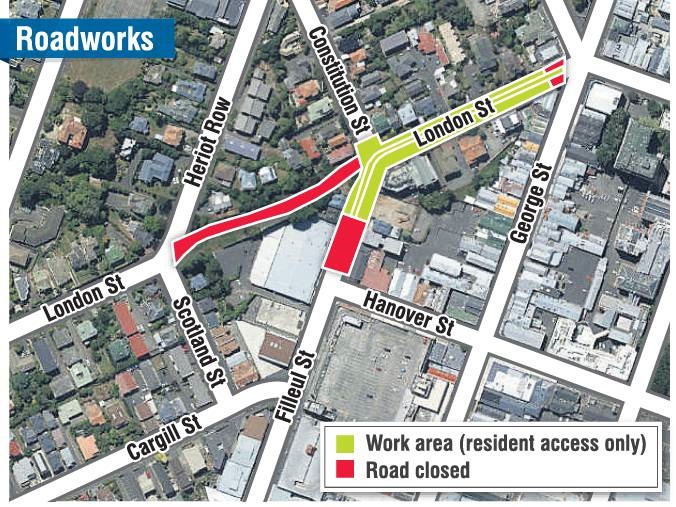 Parts of London and Filleul Sts in central Dunedin are to be dug up to replace 80-year-old pipes before changes to the city’s main shopping street.

The work, which begins at the George St end of London St, working towards Filleul St in stages, started this week.

Road closures will be in place from next Tuesday.

Dunedin City Council general manager infrastructure and development, Simon Drew, said the focus of the works would be to replace old drinking-water, wastewater and stormwater pipes, and upgrade kerbs, channelling and footpaths .

The work needed to be done before other work to improve traffic flows on London, Filleul and Great King Sts, which was, in turn, being done before the George St upgrade — three blocks of George St are to be made one-way in a southbound direction.

The George St work would begin early next year.

The work on London and Filleul Sts would also include improvements to road safety and access to car-parking facilities in the area.

Parts of both streets would be closed, but residents would still be able to access their properties.

The council asked people to allow extra time if they needed to travel in the area as there would be delays, Mr Drew said.

The work was expected to be completed by Christmas, depending on weather conditions.

Hopefully they don't get too much done in George St before the next election, these people must go.

So forget the main street mayor's vanity project and just continue to spend the rest of the $60 mill on the rest of the city's under-resourced 100-year-old infrastructure. I know, so boring huh - water and waste.

With the council upgrading the 3 waters, maybe it is a sign they won't be selling these assets to the ridiculous government 3 water plan. Some common sense at last????