Promises, politics and the stadium 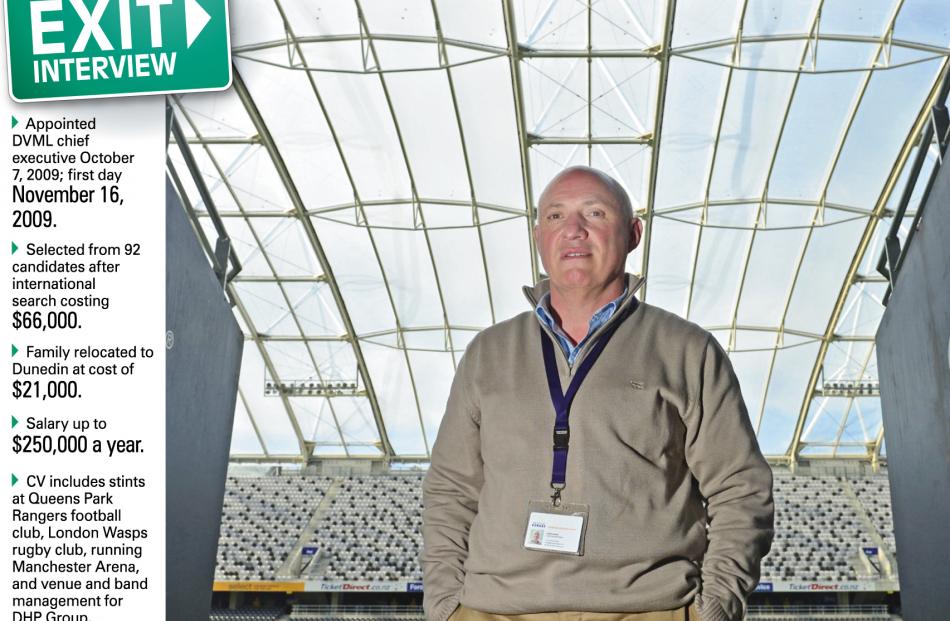 Former Dunedin Venues Management Ltd chief executive David Davies is winging his way back to England after firing some parting shots in the Forsyth Barr Stadium debate. He gave his final interview to reporter Chris Morris.

David Davies is flying home a happy yet frustrated man.

He left clutching precious memories of his time in Dunedin, insisting the city would - in time - be convinced one of the most controversial projects in its history was worth it.

But Mr Davies admitted to "mixed feelings" about the results of his time at DVML, and urged the city to do more to work together if its citizens wanted to make the most of the stadium.

He fired parting shots over some of the promises and politics surrounding the controversial project.

That included the detailed job description used to lure him to Dunedin, promising a suite of venues to run under the DVML umbrella - something unrealised nearly three years on, Mr Davies said.

Since arriving, Mr Davies said, he had confronted unrealistic promises and expectations about the venue, a flawed funding model and, in some cases, a lack of political will to do what was needed.

"I came here to do a job I have never been able to do, for various political reasons.

"I go back happy with my time here, but disappointed that I wasn't allowed to do the job that I was recruited to do."

Mr Davies insisted the frustrations and public criticism that came with the job were not the reason he was leaving.

Instead, he wanted to be reunited with two of his daughters, who had remained in England throughout his time in Dunedin, and a wife and daughter who flew home to join them earlier this year.

The long list of sport, venue and music industry experience he brought to Dunedin were heralded as the key to making the stadium work. His time here has been punctuated by successes and complaints, colourful Sir Elton John and Rugby World Cup crowds, construction cost blow-outs and operating losses.

The stress of being in "the eye of the storm" during the near-collapse of the Otago Rugby Football Union followed, as the spectre of liquidation threatened some of the private-sector fundraising - through sponsorship packages, lounge memberships and season tickets - that helped pay for the stadium.

Mr Davies said he could point to many individual highlights from his time here, but had clear views about what needed to change.

Key among them was the need for the Dunedin City Council to provide an events fund to offer a "reasonable level of support" to promoters and sports organisations considering bringing bigger, better events to Dunedin, he said.

Support was offered by other centres, including Wellington, and Dunedin needed a budget to compete.

"Simply saying we have got a fantastic venue doesn't do it."

Mr Davies said he had raised the idea with the council, but funding for it "doesn't feature at the moment" in long-term budgets.

The results were evident last week, Mr Davies believed, when New Zealand Football chief executive Grant McKavanagh confirmed the All Whites were "a long shot" to play in Dunedin.

That was because of concerns about the cost of coming to Dunedin, and because "the right environment" did not seem to be on offer, Mr McKavanagh said.

Support from the Christchurch City Council was a factor in the decision to take the All Whites to Christchurch next month.

"We can't compete with that at the moment," Mr Davies said.

He also believed still raw divisions needed to heal if the city was to work together effectively to promote the stadium's use, although that would take time.

There had been talk of a "Dunedin Incorporated" approach to market the stadium, harnessing the talents of DVML, the council and other major organisations.

But there had been few signs of that coming together, despite a good relationship between DVML and the University of Otago, Mr Davies said.

He criticised parts of the stadium construction process, including the decision to include only an "incredibly small" contingency to cover any overspend.

Asked who was to blame for that, Mr Davies said there was "only one shareholder" - referring to the Dunedin City Council.

"They made the decision to build it. People's feet were always going to get held to the fire. If someone came out of the woodwork there was nowhere to go."

He also said others "have had to live with the promises made" during the stadium's inception.

Dunedin needed to realise it was not Vector Arena, and expectations had to be adjusted.

That was especially true without an events fund to help lure promoters, and even a small fund might mean the stadium had to concentrate on national - rather than international - events.

"I think the days of Malcolm [Farry, former Carisbrook Stadium Trust chairman] sitting in front of council saying it's all things to all people are gone.

"It's a grass pitch and a stadium ... it's not got the degree of flexibility that was presented to the city seven years ago."

Mr Davies said he did not take criticism personally, but it had been "impossible to ignore" some of the "chorus" aimed at the project, and his wife had found some aspects "tough" to deal with.

Critics - and politicians - needed to remember the venue was still in start-up mode, he believed.

"The opening phase of any operation like this is incredibly tumultuous. Settling down takes a little bit of time.

"The reality is we have got it. We ought to exploit it."

Much good work had already been done in the first year, he said, pointing to successes in selling lounge membership and sponsorship packages, improving customer service and attracting a range of events beyond professional rugby.

Mistakes had been made along the way, but lessons had been learnt from them, he said.

The near-collapse of the ORFU had been a "significant worry".

"[That] did throw a lot of stress on everybody associated with it, because they were a fundamental part and justification for doing the project in the first place.

"People in the eye of that storm felt quite strongly the stress of the public glare."

The futures of DVML and the stadium are being reviewed, with results to be considered by a council subcommittee later this year.

Mr Davies said that was an important step.

He had planned to stay in his role until March next year, to oversee the "transition" to a new chief executive, but the appointment of Darren Burden as his replacement meant the process could be brought forward. He planned to surprise his family back in England, who were not expecting his return until Christmas.

He predicted residents would one day be "incredibly proud" of the stadium.

He would also "like to think" it would prove to be profitable in time.

The details of any settlement package with Mr Davies were not yet known, and he was coy when asked about his future.

Asked if he had a job lined up, Mr Davies would only say he had "no immediate plans, but watch this space".

Perhaps the most important question drew the biggest pause.

"Ultimately, the city needs to reflect in probably a couple of years' time. The wounds I have talked about are still too fresh."