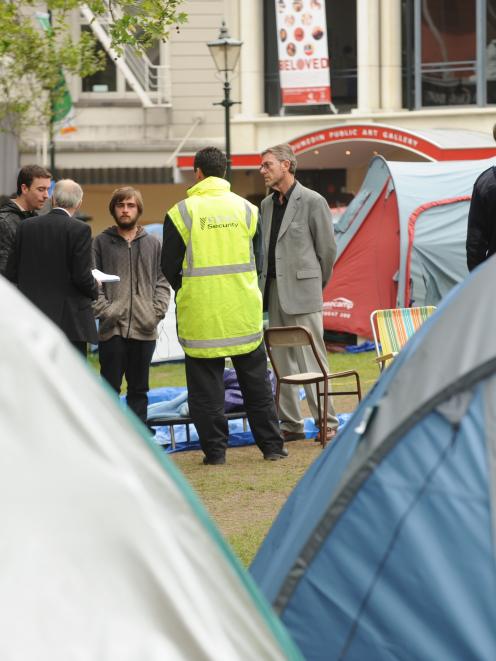 The Dunedin City Council told the group it had until 8pm tonight to vacate the Octagon, which it has occupied since October 15.

However, a statement issued about 7pm made it clear the group did not plan to move.

"We have caused no harm, and have created an open forum for discussion in the heart of the city."

An earlier statement from the group called on supporters to form a ring around the Octagon "to tell the council that the Octagon belongs to the people of Dunedin".

A public message was added to the Occupy Dunedin Facebook page asking the public to join protesters in the Octagon.

"We trust the Police will act responsibly in serving out their orders, and not use violence to remove this peaceful assembly," an Occupy Wellington movement supporter said.

Dunedin-Clutha area commander Inspector Greg Sparrow told the Otago Daily Times he was aware a trespass notice had been served but had no comment about police involvement.

The notice asked the dozens of residents to cease camping in the area by 8pm tonight, or be trespassed from the area in the "wider interest of the community".

One resident said a meeting would be held at the site at 7pm to gauge reaction, with several indicating to the ODT they would not be moved.

A statement issued by the council said despite offering an alternative site, that option was rejected by Occupy Dunedin.

"The Octagon is a reserve which the Council administers for the benefit of the public and your occupation is standing in the way of the wider public's right to use the area," the statement said.

"Your camping in the Octagon has gone well beyond what is reasonable and now displays a disregard for the lawful entitlement of others to enjoy the Octagon. The Council cannot condone continuing breaches of legal requirements such as the camping bylaws.

"In the absence of any gesture on your part to negotiate a mutually agreeable outcome the Council now requires you to cease camping and leave the Octagon.

"The Council regrets we have had to resort to such a move but in the wider interests of the community your unwillingness to negotiate has obliged the Council to seek a resolution through legal enforcement action."

If the protesters do not leave the Octagon by 8pm they potentially face a fine not exceeding $1000, or imprisonment for a term not exceeding six months.