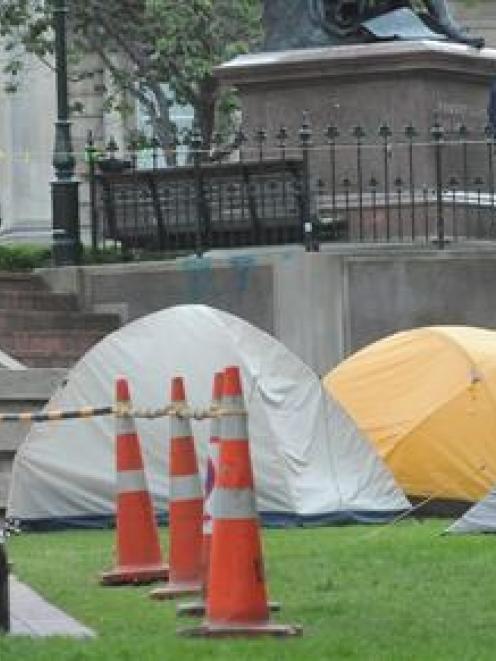 A handful of protesters went about their business as Dunedin City Council contractors began lifting and scraping paving bricks at 9pm in preparation for a concrete cutting tool to be used later in the night.

Some protesters sat listening to music in the upper Octagon stage, which has become the group's campaign headquarters since they moved in on October 15, while others talked or watched the workmen. About 15 tents remain.

One person walked about waving a small flagpole.

The contractors will spend several nights a week for the next three weeks replacing paving in the upper Octagon.

A planned march by the Occupy Dunedin movement did not go ahead on Saturday. A handful of supporters and three police officers showed up for the 11.11am start, but Occupy Dunedin spokesman Kieran Trass said the march was being postponed until Friday because of a lack of promotion and marchers.

Police also kept an eye on possible conflict during the weekend after aggressive behaviour towards Occupy Dunedin protesters was reported. A call for people to harass those involved in the peaceful protest had been flagged on a social media site on Saturday.

Inspector Alastair Dickie said police received information about an "anti-group" demonstration timed to take place at 1pm on Saturday at the Octagon.

Police were prepared to be "peace-keepers" in any such situation where conflict might arise, he said.

Mr Trass said the site was visited by another "angry drunk" on Friday night who had tried to take tents down. Occupiers stopped the man and notified police but the man ran off before police arrived, he said.

Last week, police charged a 49-year-old IT professional with common assault after he allegedly head-butted a protester.