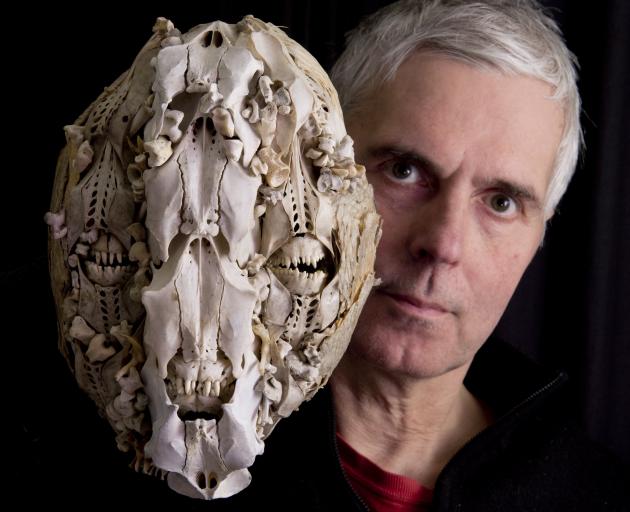 Showing off a previous work, a bone collage mask, is Dunedin artist and World of WearableArt finalist Bruce Mahalski at the Dunedin Museum of Natural Mystery, which he owns. PHOTO: GERARD O’BRIEN
Bruce Mahalski hopes to inspire people to look at something they did not think was beautiful, and realise that it is.

The Dunedin artist is one of two Otago designers selected for this year’s World of WearableArt Awards Show (WOW).

Wanaka’s Ruth Arkless is also a finalist and said she was humbled to be exhibiting alongside international designers who have done runway shows in London.

An audience of more than 60,000 is expected to attend the theatrical stage production in Wellington which will showcase the designs of 102 finalists, from 19 countries and regions, from September 30 to October 17.

It was the first time entering for Mr Mahalski, who said he had always maintained that WOW was ‘‘not my thing’’.

That was until writer, illustrator and wearable arts designer Fifi Colston suggested that they collaborated on an entry.

‘‘My brain did some computations ... Fifi just about always wins her sections. She knows what she is doing — yes,’’ he said.

Ms Colston made the top of the piece entered, and Mr Mahalski made the bottom.

Mr Mahalski, who owns the Dunedin Museum of Natural Mystery, could not go into detail but said the inspiration behind the garment was his desire to make people realise bones and death are not scary.

Ms Arkless had entered five times and has now been a finalist three times. That success did not mean it got any easier to submit an application, she said.

Her entry in the monochromatic category was created on her home sewing machine, from a roll of vintage fabric she found in Dunedin in 2019, and was inspired by her thoughts about the impact of social media and sustainability of resources.

The finalists will compete for awards across three recurring sections — Aotearoa, Avant-garde and Open — as well as three new sections — Architecture, Elizabethan Era and Monochromatic.

The finalist entries will go through two further stages of judging, where they are assessed on stage, before debuting on opening night of the WOW Awards Show on September 30.