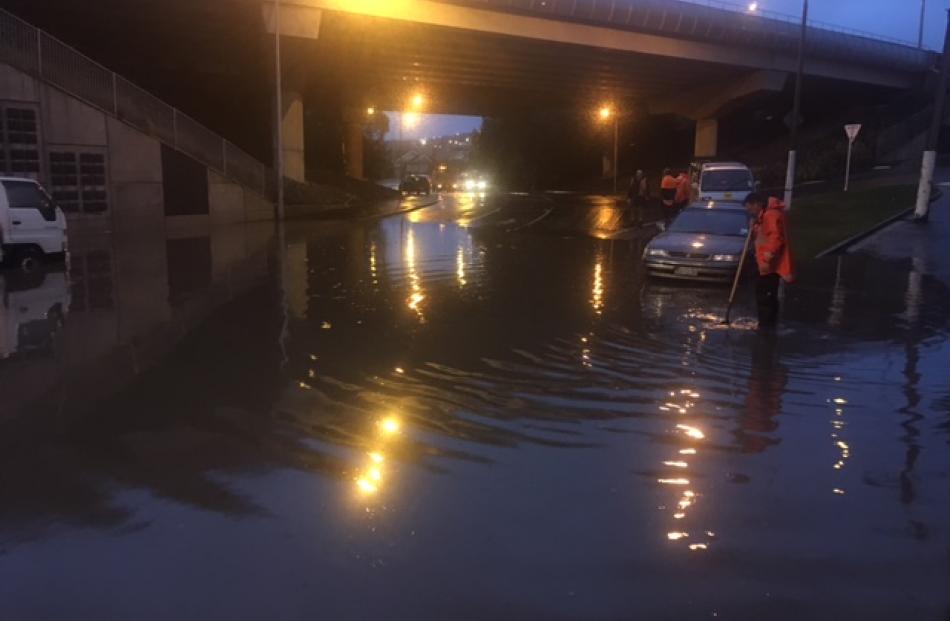 Flooding at the Glen in South Dunedin this morning. Photo: Stephen Jaquiery 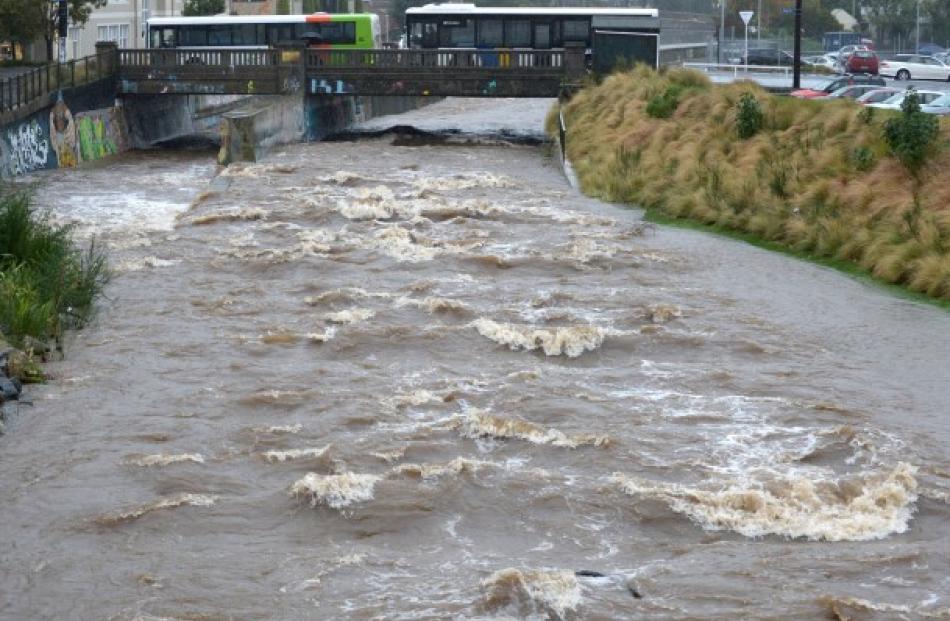 The Water of Leith between Clyde and Forth Sts. Photo: Gerard O'Brien

Motorists are warned to take care and drive to conditions, as a wintry cold snap brings flooding and snow in the South, closing some roads.

In Southland, several roads have closed due to widespread flooding, the district council advised, and people should only travel only if necessary. Some roads were also shut in Clutha.

In Dunedin, which was hit by severe flooding last year, water was knee-deep in some places. There was surface flooding and ponding on roads including North Dunedin, South Dunedin and Mosgiel. The Fire Service said it attended several ''minor'' incidents, which included some pumping at the Glen. Surface flooding also affected Leith Valley.

However, local authorities said the flooding was not on a serious enough scale to warrant a Civil Defence Emergency.  Drivers should slow down and take care.

Snow was forecast for all alpine passes from this afternoon until tomorrow, and the Danseys Pass closed mid-afternoon.

The New Zealand Transport Agency said all highways in Otago and Southland were open, but caution was advised for many due to flooding (check highway conditions here).

Civil Defence staff are monitoring river levels in the district and while rain is still falling, it appears to have eased in many places.

Dunedin City Council staff and contractors were busy inspecting areas this afternoon and clearing drains blocked by leaves. Roading maintenance engineer Peter Standring said leaves blocking mud tank grates have exacerbated the problem. Contractors have been collecting and clearing leaves over the past six weeks, but it was an ongoing issue over autumn.

IAG Insurance said on Twitter that it had closed its South Dunedin AMI store due to the flooding.

The Musselburgh Pumping Station recorded 44.2mm of rain in the 24 hours to about 11am today. Mr Standring said the contractor had crews out over the weekend and more would be called out as required.

Residents should report any flooding issues to the council as soon as possible by phoning (03) 477-4000. Mr Standring said the council also appreciated any efforts by people to clear leaves and debris from grates to ensure water drains away.

The DCC said it had received several reports of flooding in gardens and garages.

The Otago Regional Council said it was monitoring river levels in the region, but the rain was beginning to ease.

The Clutha River at Balclutha was higher than normal and had passed through the first warning stage. However, Dr Palmer said that apart from water on some low-lying land directly beside the river, the effects of this flooding were proving to be minimal.

In Dunedin, the Silver Stream and Water of Leith were falling.

In Southland, several roads will remain closed overnight due to widespread flooding. Roads closed in the Garsten/Athol area were Nokomai Rd, Hume Rd and Brightwater Rd. In the Waikaia area, Piano Flat Rd, Block Rd and Pyramid Waiparu Rd were also shut. The Riversdale-Waikaia Rd is closed at Waipounamu, while Keowns Bridge Rd is closed, as is the Pyramid Bridge.

Trees are down on the Lilburn-Monowai and Kakapo Rds.

The Clutha District Council advised of the following closures overnight:

Due to flooding, a detour is in place at the Pomahaka Bridge on SH90.

Many other areas are affected by surface flooding.

The Southern Scenic Route through the Clutha District is also closed at Caberfeidh and there is flooding across the road at the Tahakopa township.

We have a number of highways with surface flooding in #Southland & #Otago. Check out our website for details https://t.co/j6NSmhBlwg ^LT

Snow is forecast for all alpine passes.

On the Lewis and Arthur's passes, up to 2cm could fall near the summit of the roads from this evening until tomorrow morning.

On Porters Pass, snow showers were expected to continue for top parts of the road until tomorrow morning, where a further 3cm to 6cm could accumulate.

On the Lindis Pass, snow was expected at the top of the road until this evening. Between 11am and 7pm, a further 2cm to 5cm was forecast above 900 metres, with lesser amounts down to 700 metres.