Ross Creek bush to be cleared in upgrade 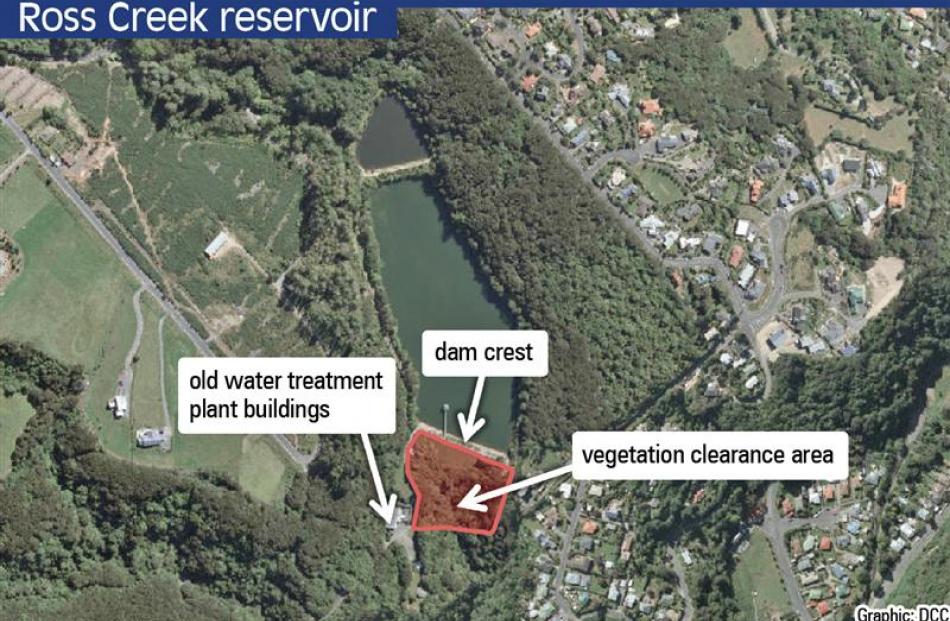 About 5000sq m of regenerated native bush at the Ross Creek Reservoir in Dunedin will be sacrificed as part of a $2.1 million project to restore the old dam's earth embankment.

Dunedin City Council contractors are due to move in next month to begin clearing the 0.5ha bush-clad site immediately below the dam's embankment, which includes one of the area's popular walking tracks.

The clearance would be the first stage of major construction work at the site over the next 18 months to refurbish the 145-year-old dam's embankment, which was found in 2010 to have developed large cracks.

Details of the first stage, to clear bush in the work area, were confirmed by Dunedin City Council and Opus staff at a media briefing yesterday.

Council staff were ''very aware'' of the area's popularity, but the work was essential.

''We are going to be as sensitive as we can, but the reality is it's a fairly major construction project.

''Some people will be upset, I'm sure.

''This is a very popular reserve and the reality is there will be a period of time where people's favourite tracks ... will be out of bounds, and nobody really likes that.''

Dunedin Amenities Society president Mick Field said he was yet to see details of the work, or discuss it with council staff, but the planned clearance appeared to be ''a substantial amount of bush''.

''There would have to be good reason to want to remove it.''

He expected to discuss the council's plans with staff in the coming days, but said it was important to remember the area's primary purpose: ''It is a water reservoir''.

Contractors expected to take two weeks to clear the bush, beginning on May 6, and tracks in the area around the embankment - including the crest track - would be closed during that period, Mr Osborn said.

Clearing the bush would allow detailed measurement and design work on site, as well as providing space for vehicle movements and for 15,000cu m of fill - needed to strengthen the dam's embankment - to be dumped on site.

Once bush was cleared, there would be minor activity in the area until major construction work on the embankment began in October.

That could take another year to complete and would include extending the foot of the embankment part-way into the cleared area, allowing the embankment's slope gradient to be reduced and the structure to be stabilised, he said.

Without the work, the reservoir would need to be kept at a low water level or risk collapse, he said.

Tracks would again be closed during the work, except those north of the crest, he said. Once finished, the embankment would be sown with grass while the remaining cleared area was replanted.

The council had notified the New Zealand Historic Places Trust - given the site's category one classification - the Dunedin Amenities Society and neighbours within 500m.

Otago Regional Council consent would be needed, but was likely to be processed on a non-notified basis - meaning no public submissions or a hearing - once detailed plans were ready later in the year, Mr Osborn said.

The reservoir's refurbishment would see it used as a raw water storage facility for Dunedin, providing backup to the city's supply should Deep Creek and Deep Stream supplies fail.

The two pipes together carried 70% of the city's water through ''fairly hairy'' rough country before crossing the Taieri River on a single bridge, meaning the supply was vulnerable, he said.

The council had budgeted more than $12 million for a tunnel under the river, to improve supply security, but diverted the funds to the Ross Creek Reservoir project instead, he said.

The council would also spend $3.4 million on a new pumping station at the reservoir, and a pipeline connecting it to the Mt Grand water treatment plant.

Another pumping station - costing $600,000 - would also be added at the Southern water treatment plant, adding to the network's security.

The new approach was expected to deliver $11.2 million in savings over the next decade, he said.