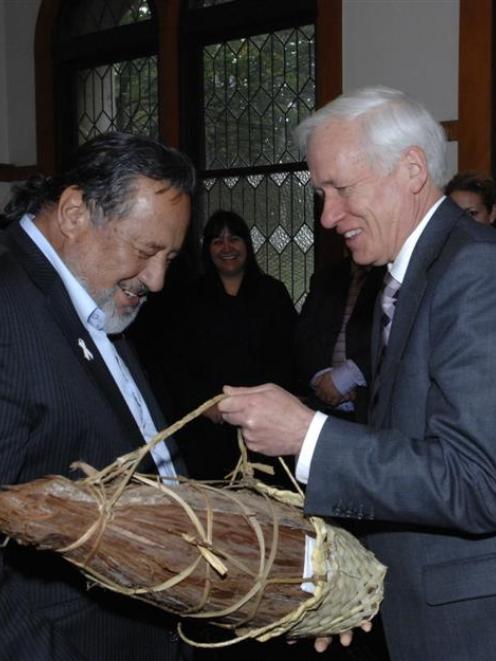 Speaking without notes at a well-attended lecture at the University of Otago's Marama Hall last night, the Maori Party co-leader was surprised several people had approached him at Dunedin International Airport to say "the waka's good".

The goodwill gave him heart over the Maori Party's wider agenda.

"[These people] would not be voting for [the Maori Party], but they want Maori to succeed, they like our style."

Dr Sharples faced flak this week for the $1.8 million the Government handed the largest hapu in his Tamaki Makaurau electorate for a waka on the Auckland waterfront.

Neither Queen St nor Auckland's waterfront had a single Maori icon reflecting Auckland's status as the biggest Maori population centre in the world. The World Cup was the time to show the world New Zealand's vibrant face rather than reflecting just "doom and gloom" by funding only essential services, Dr Sharples said.

The Maori Party was forced to compromise to be part of the Government, but the coalition was essential for gains such as Whanau Ora and the marine and coastal area legislation, he said.

"If you're in the opposition, you might as well go and eat your lunch in the park."

Joking the foreshore and seabed issue was "done and dusted", Dr Sharples said "what I want to talk about is why we should be telling everyone to support the Maori Party".

"If the Maori Party fails and we lose our seats ... there will not be another opportunity for Maori to do this again."

The mostly amicable lecture had one flash point when an audience member criticised Dr Sharple's response to a question about the Petrobras permit controversy in the Eastern Bay of Plenty as "wishy-washy".

Dr Sharples said the party supported local iwi Te Whanau a Apanui's opposition to the Brazilian company exploring the Raukumara Basin for oil, but the Government did not consult it on everything.