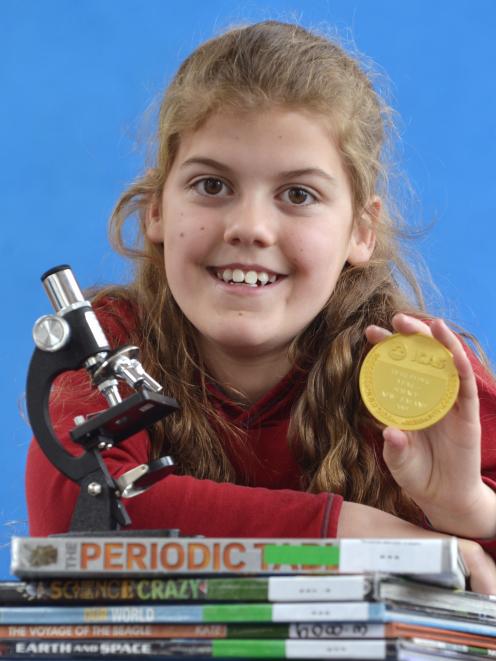 Beth Elder thinks it is funny she has won a gold medal for gaining the top mark in the recent University of New South Wales International Competitions and Assessments for Schools (ICAS) year 5 science exam; the thing people are most interested in is whether it is real gold or not.

For the record, Beth said she has no idea if the gold is real.

The thing that was more important to the 9-year-old George Street Normal School pupil was that it was a recognition of her hard work and outstanding academic ability.

She said she did the ICAS English exam last year because it is her favourite subject, and she was delighted to gain high distinction — a mark placing her in the top 1% of candidates.

This year, she decided to test her knowledge of science by sitting the ICAS science exam, and was ‘‘thrilled and a little surprised’’ to receive the top mark for New Zealand in the exam.

‘‘I didn’t even know there was a gold medal. I thought high distinction was the highest you could get.’’

Now that she knows how to win one, she will be aiming to win more in the future.

She said the science of success was to sit as many practice exams as possible.

Pupils at his school had gained top marks in ICAS science, computer skills, mathematics and spelling in the past, and this year had been another excellent academic year for the school.

“The combination of naturally able children, high quality teaching and strengths-based learning enables our children to succeed,’’ he said.

‘‘Beth is clever, hard-working and humble, and I think she has many strengths which she uses well.

‘‘I was very pleased that she participated in these exams because it’s not compulsory — she chose to do that — and this is the result. It’s a lovely outcome for her.’’