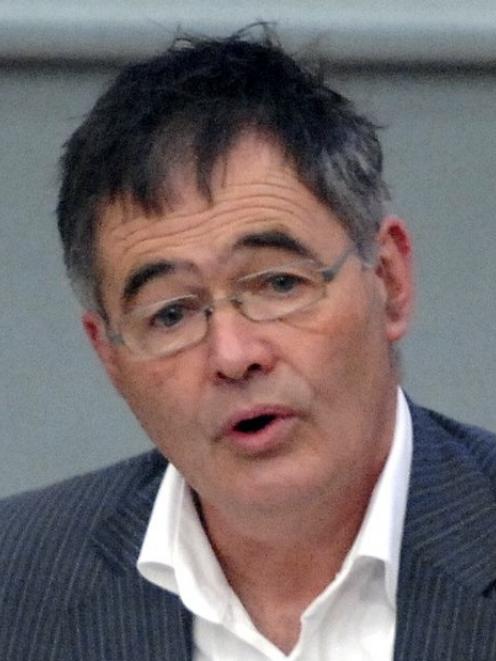 Dave Cull.
Dunedin Mayor Dave Cull said today he would not rule out the use of private security guards to evict the Occupy Dunedin protesters, as the city council looks for "urgent clarification" on its legal position.

Mr Cull said yesterday he was "completely at a loss" after police ruled out enforcing trespass notices that would have forced the protesters to quit their Octagon encampment.

Mr Cull said yesterday there was an "overwhelming" message from the community it wanted the protesters gone.

The police response had national implications for the rule of law, and he said he would be surprised if the police decision had not been made at a national level.

Mr Cull said the council was confident of its legal position, that the breach of council bylaws meant the protesters were not protesting legally, and had to go.

"They seem to be determined to punish the community," Mr Cull said of the protesters.

Otago University law professor Andrew Geddis was not surprised by the police decision.

"The particular notices that council gave were very light on specifics as to why it was actually necessary or why council regarded it as necessary to move them on," he said.

"Effectively it said that the protestors were in breach of a camping bylaw, but just because a protest breaches a bylaw doesn't take it out from underneath the umbrella of the Bill of Rights Act.

"A bylaw in itself doesn't stop protest."

Mr Geddis said the other reason the protestors were told they had to go was because they were interfering with the rights of others to use the upper Octagon.

"It didn't really specify how or why interference was occurring. They didn't say 'this particular group wants to use the Octagon and they can't because you are there', or 'this person has tried to walk through the Octagon but you have to stopped them'."

Mr Geddis said the occupation could continue for as long as until it became "unreasonable".

"At some point you have to think, yes, the sheer length of time a protest has gone on renders it unreasonable. The longer it goes on the more likely it is that it will start interfering with other uses of the upper Octagon."

"Once those sorts of impacts start to happen then there is more likely to be grounds for the council to have a good reason to want them to move on and then the police are more likely to be prepared to take action."

However, Mr Geddis said the council does have other options to remove the protestors.

"The Octagon where the protests is a reserve. The council could seek a court order under the Reserves Act to try to force the protesters to move on.

"If they got that court order then the police would act to enforce that. That of course requires the council to fund its court case."

Mr Geddis believed the trespass notices were a way to shift the problem to the police and have them pay for the action.

"Now the council is faced [with the question] do they want a costly court process, already given the fact that Dunedin's coffers are empty and we are facing reasonable rate increases? Is this really an issue that is worth spending money on?"

Mr Geddis said police were acting in a "cautious and commendable manner" by not enforcing the trespass notices.

"I think the police have taken on board messages they've been sent from both the courts about other forms of protest in the past, and also messages they were sent by Parliament's Justice and Electoral Committee, with regards to protests against the Chinese Premier in 2000, where it has been indicated to them that protest does need to be given a higher priority or be treated more seriously.

"I think what the police have thought is until the council can give a much better reason for wanting rid of the protestors that goes beyond simply 'we think they've been there long enough and we are a bit annoyed with them', that's not good enough to stop people carrying our a protest that is guaranteed under the Bill of Rights Act."

The chairperson of the Human Rights Foundation of Aotearoa New Zealand, lawyer Tim McBride, also commended the actions of the police.

"Good on the police for taking this approach and not just acting as a rubber stamp for a local authority," he said. "Ongoing protest is a very important and valuable form of protest action in terms of bringing the message to people."

Mr McBride believed previous protest cases, such as that of Valerie Morse - who had a 2007 flag burning conviction quashed by the Supreme Court earlier this year, may have influenced the decision.

"I think that being in the background would have been an influence, at least for the time being, to back off from trying to enforce this trespass order."

"The new Policing Act [2008] explicitly refers to the importance of human rights. It's right there in lights and there was nothing in the previous legislation that made any reference to it."