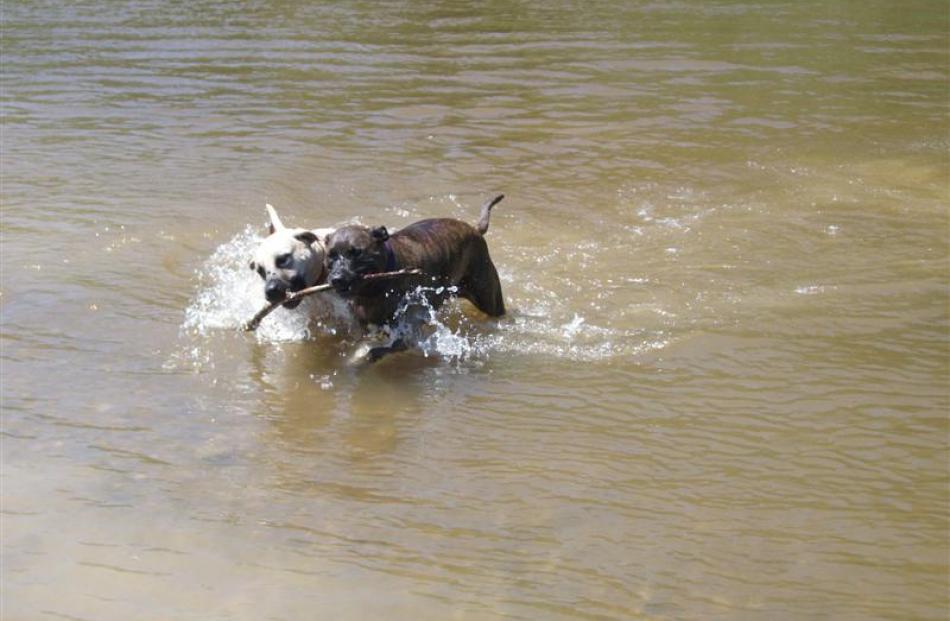 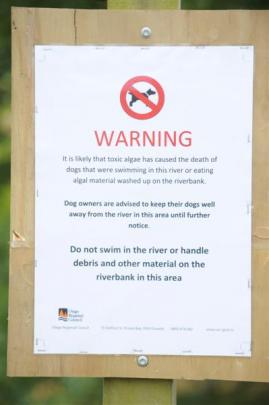 A sign warning of toxic algae at the Silver Stream last year. Photo by Peter McIntosh.

A much-loved dog has died after probably ingesting a toxic algae in the Silver Stream, at Mosgiel, and the loss has devastated its owners.

The incident was reported to the Otago Regional Council on Thursday, and yesterday the council issued a warning to the public to be wary of swimming or allowing dogs access to the stream.

They did not see any warning signs and, as there were other dogs and children in the water, thought it was safe.

The dogs "were only in there five or 10 minutes, as we decided it didn't smell good [under the bridge]," Mr Pritchard said.

They noticed 4-year-old Belle's eyes were bloodshot soon after getting to their friend's house and then she collapsed, he said.

Thirty minutes later, at the nearest veterinary practice, she was dead.

"She was our baby. We loved her heaps," Mrs Pritchard said.

Mosgiel veterinarian practices yesterday indicated there had only been the one case reported.

Council environmental services manager Martin King said the toxic algae phorimidium was identified in the stream but the full extent of the problem was not yet known.

It was hoped yesterday's rain would flush the river, removing what algae was there.

The normally black, shiny algae was regularly found in Otago during the summer, especially on rocks or stream weeds, but the dried substance on banks could also pose a risk, he said.

Signs put up in 2010, when it was thought the algae was the cause of two dog deaths, were up this summer, and the council had warned people last month that the algae could be in rivers.

"This is just one of those unfortunate things," Mr King said.

Because the algae had been found in the Silver Stream, it was likely to be in other rivers in the region. It liked high temperatures and low flows, he said.

Parents and caregivers should supervise children playing close to the Silver Stream to ensure they did not touch or eat the algae, and dog owners should keep their pets out of the water. Users of other rivers should also exercise caution, Mr King said.

"The algae is likely to remain a problem until we get higher flows and cooler temperatures."

Medical advice should be sought if people became ill after swallowing water containing algal bloom, and if animals became sick it was important to contact a veterinarian immediately, he said.

The regional council would continue to monitor rivers to see how widespread the algae was.