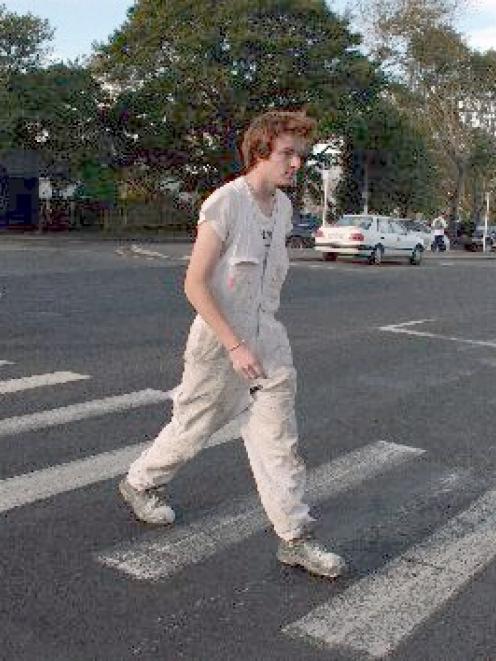 Painted on: Taylor Dixon tries his luck on the pedestrian crossing at Mornington. The area is a "hostile environment" for pedestrians, according to a council report. Photo by Dan Hutchinson
Six Dunedin suburbs need "intensive revitalisation", a detailed study of the city's amenities says.

Mornington was described as "a hostile environment for pedestrians and cyclists", while Port Chalmers had "possible conflict between pedestrians, trucks, parked cars, cyclists".

Caversham had poorly defined definition at its entrances and also had issues with pedestrian safety.

The Gardens needed better seating, cycle racks and tourist signs and there were problems for cyclists and drivers.

Mosgiel had "little space for cyclists" and "poor pedestrian access across some big box areas".

Another 20 areas have been classified as needing minor improvements such as more lighting, pedestrian access, plants, rubbish bins and other infrastructure items.

The report was discussed by the Dunedin City Council planning and environment committee this week and would be used to help prioritise the programme of works in the council's citywide amenities upgrade.

Mornington resident Denis Stewart said he thought the area was "generally pretty good", although he had some difficulty on his mobility scooter negotiating dips in the footpaths and overhanging bushes.

He said the Mornington shopping area was quite busy but if people used their common sense it would not be a problem.

"I don't know about intensive, but it needs someone to come along and do general maintenance," Mr Stewart said.

A group of painters working on a shop just down the road in Mornington have had a great view of the traffic conditions for the last few days, with their "smoko" area beside the pedestrian crossing.

"There are some very rude drivers coming through here. Some people just don't stop.

"And some people just step out on the road without looking," said one of the painters, Jon Waite.

The report would be used to help prioritise work being done under the amenity upgrades project and would also link in with other work being done by other council departments.

Mornington - "A hostile environment for pedestrians and cyclists" and needs more street trees, planting and furniture.

Mosgiel - Not enough space for cyclists and some poor pedestrian access.