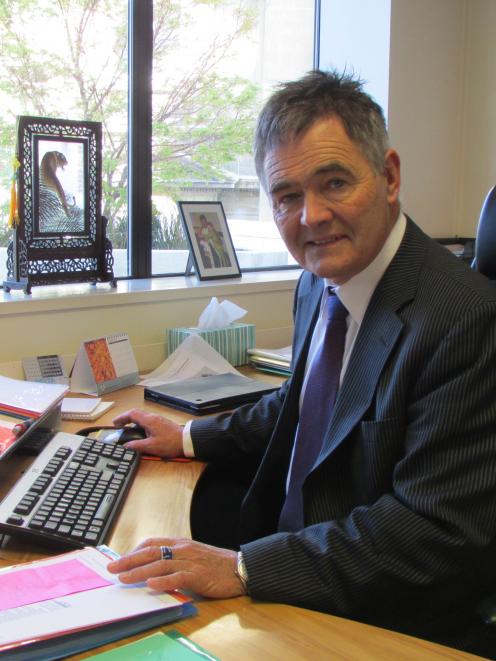 Dunedin Mayor Dave Cull believes a collaborative approach is the best way to tackle social housing into the future. Photo by Brenda Harwood
The Dunedin City Council and social agencies believe the city will need to find ways to carve out its own future to meet the social housing needs of an ageing population.

With the Government moving to sell off Housing New Zealand stock across the country, and signalling it would like to shift the administration of social housing to NGOs, a major change is in the wind. For the moment, council and agencies are adopting a cautious approach, but the discussion on Dunedin's future housing needs has begun.

Dunedin Mayor Dave Cull said much of the council's housing policies were around social housing, and it was well aware there would be increased need in the future.

With the sale of Housing NZ stock first signalled two years ago, the council had explored a range of options, including the possibility of collaborating with NGOs or private investors to meet the needs of the community, Mr Cull said.

''From my understanding, the issue in Dunedin with HNZ stock is that it is not only in the wrong place, but the wrong size,'' he said.

However, it would be a concern if the proceeds from sales were taken away from the city.

''Just because the housing asset doesn't match the need, doesn't mean that there isn't a need,'' he said.

In terms of the overall quality of Dunedin's housing, Mr Cull believed standards should be set for rental houses, especially for weathertightness, insulation and heating.

''The quality of housing is a consumer issue - if you are renting out a property, the community has a right to demand certain standards.''

Methodist Mission director Laura Black said the organisation had no plans to become a social housing provider, as it was complex and required specific expertise.

When the Government referred to social housing, it really meant low-cost housing for low-income people, but the social sector also saw the need for support services for those people, she said.

But getting involved in housing stock management, repairs and maintenance, collecting rent and so on, required different expertise. And, if social organisations borrowed the money to buy social housing, they would then face finding the capital to upgrade housing, retrofit insulation, and provide the social services, she said.

''There are a lot of technical problems that could come back and bite you on the ankles, and that could risk reducing the overall volume and quality of housing stock, and crippling NGOs,'' she said.

However, Ms Black was supportive of the idea of selling one-third of Housing NZ stock on the open market - as it was often not fit for purpose - and then using the money to build appropriate housing stock.

''As Christchurch and Auckland, quite reasonably, feature much higher on the priority list for social housing, Dunedin needs to carve out its own destiny,'' Mrs Bremner said.

''It is definitely time to take a fresh look at what the possibilities might be.''

DCC events and community development manager Rebecca Williams said that, as the Government's priorities were Auckland and Christchurch, Dunedin would have to look after its own social housing needs.

''We are currently exploring options around that and how the city collectively might protect itself into the future,'' Mrs Williams said.

''I think we are quite well served at present.''