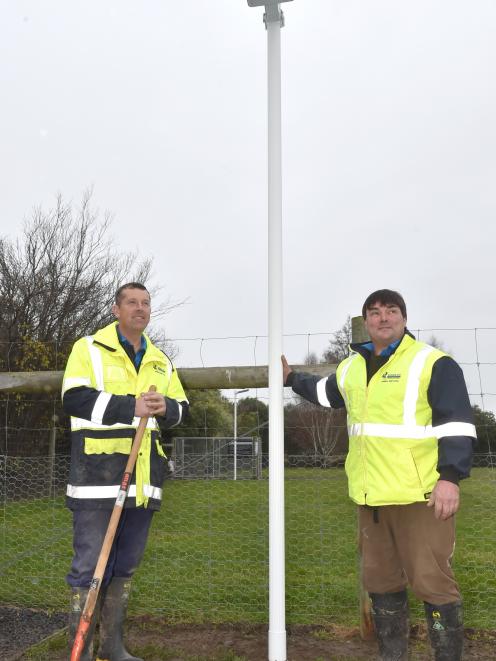 Animal control officers Alister Wilden (left) and Tony Newman with a newly installed solar light at the Shand St dog park in Green Island. PHOTO: GREGOR RICHARDSON
New lighting will be installed at five Dunedin dog parks over the next fortnight, following a successful trial at the East Taieri facility.

Fourteen lights will be added to entranceways and shelters at Rotary Park, Forrester Park, East Taieri small dog park, Shand Park and Wakari Park to increase safety for people when walking their dogs at night.

Feedback from a survey of East Taieri users showed that people felt safer using the dog park following the addition of the lighting.

"At this time of year when the daylight hours are pretty restricted, and given the success of the East Taieri trial, we thought anything surplus left over at the end of the year should go to some lighting at the other dog parks, as well.

"The lights just give people more security, especially going through the gateways at night-time and provide a little bit more safety for people entering and exiting the dog parks."

The solar lights, which will be installed wirelessly, have sensors which illuminate them more as people walk under them.

They have been funded by dog registration fees at a cost of $8000.