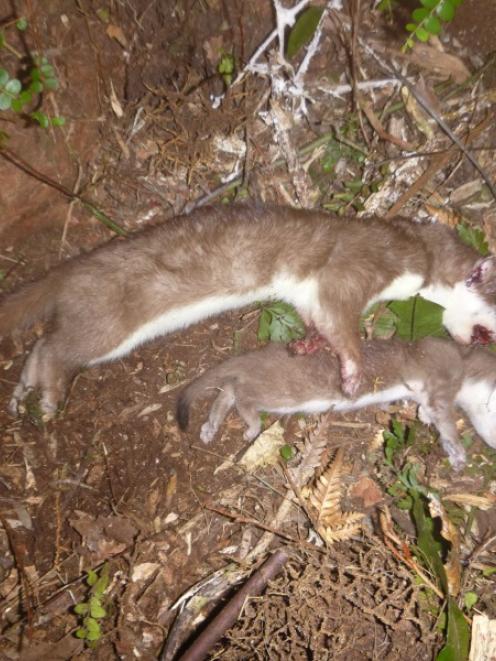 The mother stoat and one kit after having been caught leaving the den. Photo: Supplied
A rogue stoat that had been terrorising native wildlife and perplexing staff at Orokonui Ecosanctuary has been killed.

Conservation manager Elton Smith said information released in September that the stoat had likely been poisoned was incorrect and it was ''high likely'' this was the stoat detected in June.

A stoat-detecting dog from the Bay of Islands found a den inside the predator-proof fence on November 5 and a mother and two offspring kits were trapped and killed.

''Her [the stoat's] fatal flaw was trying to save her young,'' Mr Smith said. ''We trapped her and her young one.''

The den was identified at the base of a Totara tree by the dog and staff covered three of five entrances with soil and stones. Traps were placed on the other two entrances and within 24 hours, the stoat had been trapped.

The second kit was found unconscious inside the den.

Mr Smith said the stoats had most definitely been taking native birds to eat.

''There's no doubt about it, they have killed,'' he said.

''The fact that we can't find any Saddlebacks any more [confirms it].

Orokonui was the only area on the mainland that previously had Saddlebacks.

The remains of a Kaka was found inside the den.

Mr Smith said the stoat could have got in to the predator-free zone by climbing the fence during a heavy snowfall in June but a more likely scenario was that it came through an open water gate that was jammed.

''We're trying to figure out how we can change the water gate system.

''When you realise maybe you have lost an entire species, it's worth it.''

Other changes were being implemented next year to cope with predators including manually removing snow from around the fence line and the possibly of acquiring a full-time stoat detecting dog.

''We still don't know if we're stoat-free. This could be it,'' Mr Smith said.