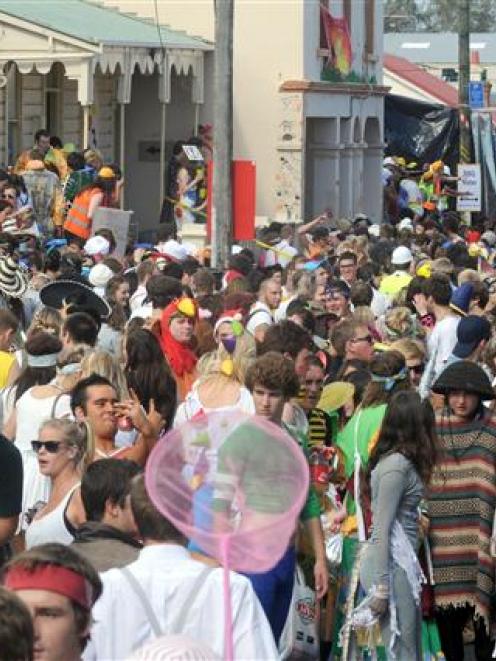 The day-long annual street party, in which students dress in a theme and drink in the street has in the past been the scene of drunkenness, fires and injuries.

However, this year everything went according to plan, with almost no glass on the street, free food, water and few problems, said Otago University Students' Association (OUSA) president Logan Edgar.

"Scarfies party mean, but Hyde Street shows we party with a lot of love.

"It's a credit to the scarfies who live in Hyde Street who came together to plan this event and agreed to support a comprehensive harm minimisation approach to the day,'' he said.

Fifteen people were arrested and a roof collapsed under revellers at the keg party last night but the large, intoxicated crowd of party-goers were generally well-behaved, police said.

Fifteen people were arrested for a variety of offences involving alcohol, and most party-goers left soon after 6pm when the event was shut down as planned.

Mr Sparrow said there was also a concern about large numbers of people sitting on roofs drinking alcohol, which saw one roof collapse under the weight.

"It was extremely dangerous and foolish and put themselves, and staff at risk, who had to get up and try to get people off.''

Mr Edgar acknowledged there were areas that could be improved next year including keeping people off roofs but was confident next year's party would be another good event.

This year the university and OUSA promoted a glass ban for the street during the party.

Dunedin City Council is considering extending its permanent CBD liquor ban to include North Dunedin, which would rule out drinking or carrying open alcohol containers in the streets.

The OUSA is championing a petition against the introduction of the liquor ban in North Dunedin.