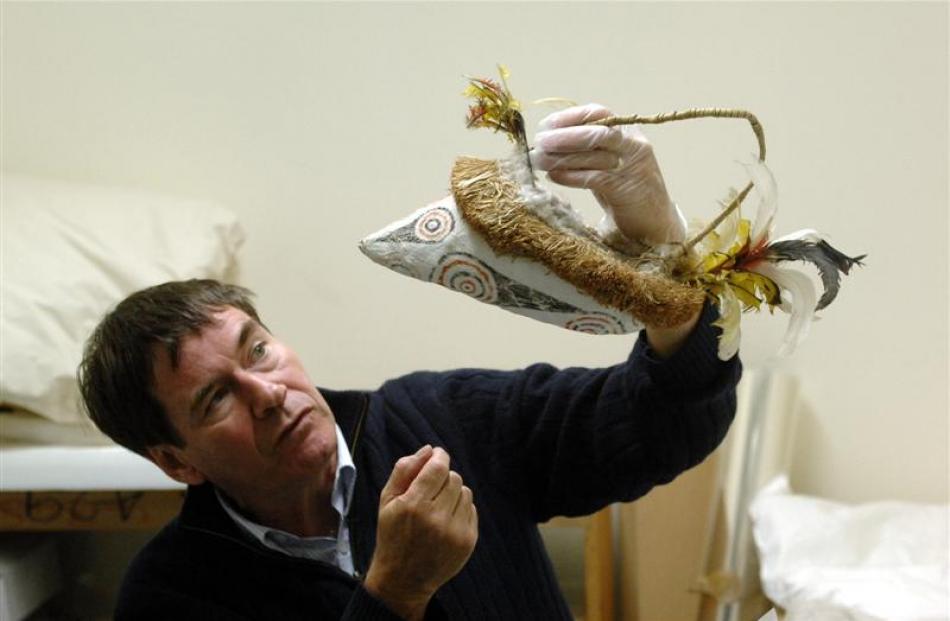 An unidentified foreign object in the Otago Museum collection has been described as "jaw-dropping" by a former-Dunedin anthropologist.

The basket, estimated to be 100 years old is about the size of a teapot and is decorated with exotic feathers. The vessel has a cotton exterior and basket weave interior, which is covered with a lime residue.

"It is pretty interesting. It was just sitting on a table and I thought 'Whoa'. It's so unique. It's an amazing thing," he said.

"It looks like a decorated basket, or a weird ballet shoe. It wasn't made for sale, but for a practical purpose. It's almost like something a cartoonist in our culture would do. It's a jaw-dropping thing.

"Most museums have fairly similar things. It isn't often you see something as different as this. You wonder how they got it. It wouldn't have been just handed over," he said.

"A lot of this stuff we don't know a lot about. It's really a mystery." The museum bought the item in the 1930s, but its provenance is unknown.

Dr Gunn said he had seen only one other similar example.

"It's really rare to see one of these. I've examined more than 140 museum collections and the only other one I've seen was in Dresden, Leipzig or Stuttgart."

The piece was made by the Tabuan tribe, from the south of New Ireland, which forms part of Papua New Guinea, he said.

"The Tabuans were a cult, or secret society sort of thing. If you did something wrong, you could be executed in the strangest way. If someone broke the rules, off went their head."

A motif on the artefact is almost identical to a design on a ceremonial execution axe, called a "dance wand", the museum has on display from the same area.

Dr Gunn has spent the past two weeks examining the Otago Museum's collection of around 300 pieces of Malagan art, from New Ireland.

He was born and grew up in Dunedin, attending Otago Boys High School before gaining a PhD in anthropology at the University of Otago.