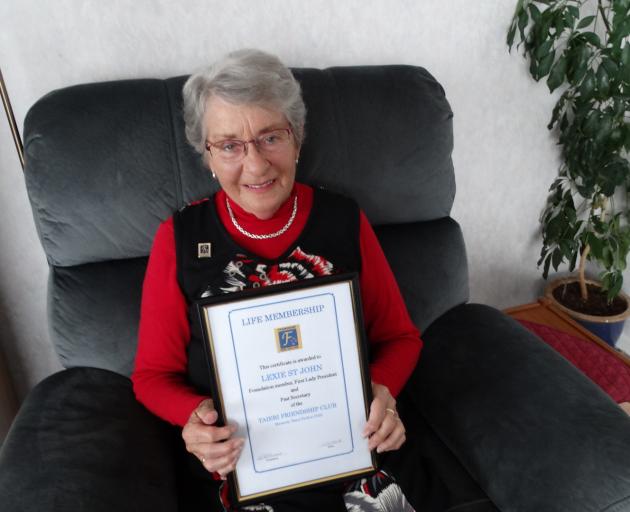 Enjoying every minute of community interaction and rewarded for it is Lexie St John. PHOTO: EMMA PERRY
Taieri Times is recognising people for the good they do in the community. In ‘‘Top Types’’ we are celebrating these people.

For 15 years Lexie St John has attended the Taieri Friendship Club, just one of many social events the Mosgiel woman attends.

Last week, she received a life membership of the club, awarded for her active participation since the founding of the group in 2003.

Attending the first meeting at the suggestion of a friend, Mrs St John enjoyed the meeting and ended up on the committee.

Following this she was nominated to be vice-president and in 2004 became the first female president of the group.

Previously known as the Taieri Probus Club, the group celebrated its 15-year anniversary last week and maintains annual membership numbers of more than 130.

Mrs St John said she felt honoured and humbled to have received the award.

"I've gained confidence, friendship and enjoyment from my time with the group.

"I'll keep attending till I can't leave the house.''

The Taieri Friendship Club has weekly meetings with guest speakers and monthly outings.

The last trip Mrs St John participated in was a movie and lunch at the Wharf Hotel.

"Loneliness is common among older people so it's great for us to have something to go to and find like-minded people.

"Mosgiel especially has a lot of older and retired people, so it's great to have groups like this.''

Other groups Mrs St John attends include a weekly walking group, a weekly leisure marching group, the Silverstream ladies' club and the Steady As You Go class.

"It keeps me occupied.''