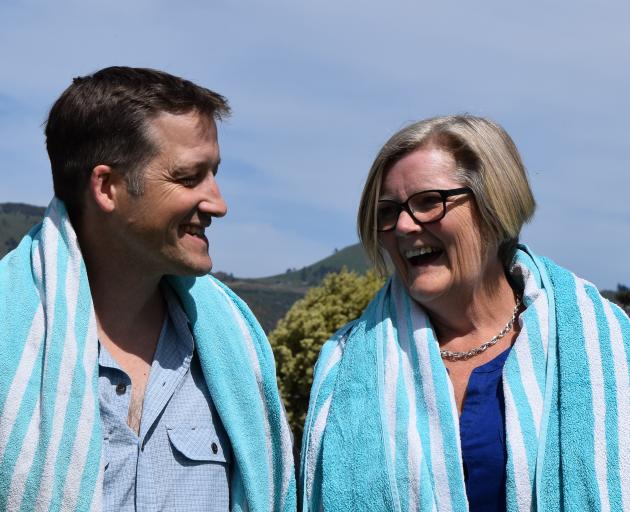 Taieri Community Facilities Trust member and former chairman Geoff Woodcock and chairwoman Irene Mosley remain positive despite a lengthy process to get a new pool built in Mosgiel. PHOTO: SHAWN MCAVINUE
Three years ago, the slogan "Togs On November 2019'' announced when people should expect a new pool facility to open in Mosgiel.

That deadline is here but the project is still at the stage of identifying a building site, and the trust behind the project is blaming the delay on a high turnover of Dunedin City Council staff.

In a front-page story in the Otago Daily Times in November 2016, Taieri Community Facilities Trust chairwoman Irene Mosley said the council and trust had created a timeline to build a new pool facility in Mosgiel and people should prepare to get their "togs on '' to enjoy a dip in November 2019.

Mrs Mosley, speaking to the Taieri Times on Monday, said the group of council staff members the trust worked with to create the timeline no longer worked at the council.

She had worked with seven different senior council staff members on the project since getting involved in 2015.

The council staff working on the project at present, who included council city services manager Sandy Graham, were more engaged than past staff, she said.

Ms Graham had been "far better'' at communicating with the trust.

Mrs Mosley said the community's efforts in raising a lot of money for the facility in a short time had been "absolutely amazing.

The trust wanted the pool to open sooner but it was now in the hands of the council.

"All we can do is keep on the council's tail.''

Former trust chairman Michael Stedman said this week the delay was because of the "incompetence'' of a "dysfunctional'' council.

"Over the years there has been a colossal turnstile of senior staff.''

It had been a case of new council staff members restarting the project rather than continuing its progress, which was "appalling''.

Trust member and former chairman Geoff Woodcock said the trust launched the pool project in 2007 and each change in senior council staff members had "reset'' the project.

"We are getting a write-off of investment every time. This is the nature of having low staff retention rates in council.''

"There are processes for processes and meetings about meetings.''

Council parks and recreation group manager Robert West said the council was working to confirm the feasibility of a site, next to the pool in Memorial Park, for the pool facility.

The work was expected to be completed by the end of January next year.

"A tender is currently in the market to procure someone to write the principles of requirement, which will feed into the design and build process for the pool construction.''

The council declined to comment on trust members' views on the impact of the high turnover of council staff.