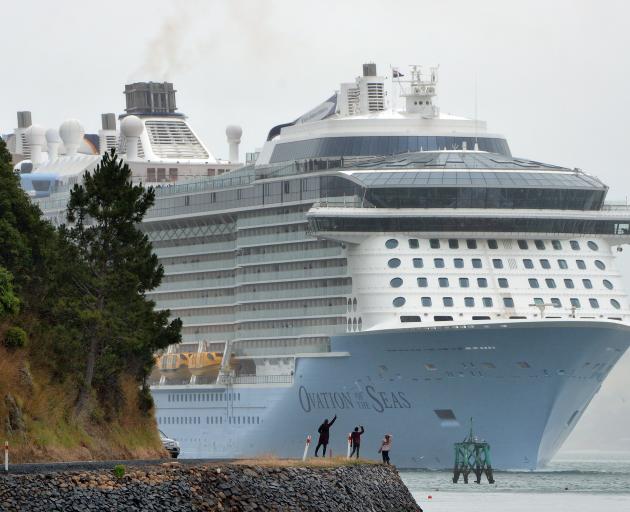 The giant cruise ship Ovation of the Seas approaches Port Chalmers on its visit to Dunedin in January. PHOTO: STEPHEN JAQUIERY
Roadworks on Otago Peninsula and an Octagon area abuzz with buses are expected to cause tensions for tourism operators when a busy cruise ship season begins next week.

The season starts with Golden Princess next Friday, which will bring more than 2500 passengers and 1100 crew to the city.

Mr Brown said there would also be 20 days this season in which two ships would visit.

February would be the busiest month, and Christmas Day and Boxing Day busy days.

The port's shipping list has both Ovation Of The Seas - which has 4180 passengers and 1300 crew - and Diamond Princess expected on Christmas Day, and Radiance of the Seas and Sea Princess on Boxing Day.

``It will be an incredibly busy time,'' he said.

The port was hoping operators would offer support by opening their businesses on what were traditionally holidays.

Operators at the meeting raised concerns about parking to pick up and drop off passengers in the Octagon, and the tickets they sometimes received from parking officers.

Dunedin i-Site visitor centre manager Louise van de Vlierd said the delay to a planned bus hub in Moray Pl - the proposal was required to go to a public hearing next month - meant plans to change parking in the Octagon had also been delayed.

Once the bus hub was in place, those changes would be made.

She also warned work on Portobello Rd safety improvements would mean delays for operators who used it on peninsula trips.

She advised them to factor in more time for those trips.