Ultra runner doing it for 'fun'

He refers to himself as the village idiot of Dunedin's running community, but Andrew Glennie is deadly serious about his latest race.

The 40-year-old ultra-runner intends to run the gruelling 100km Ultra race in the Northburn 100 event in Central Otago with a petrol-powered Masport lawnmower strapped to his back.

Every Saturday, Mr Glennie, New Zealand's 2017 24-hour running champion, can be seen out training with the lawnmower, strapped to an old tramping pack frame, at Dunedin's 5km Park Run. 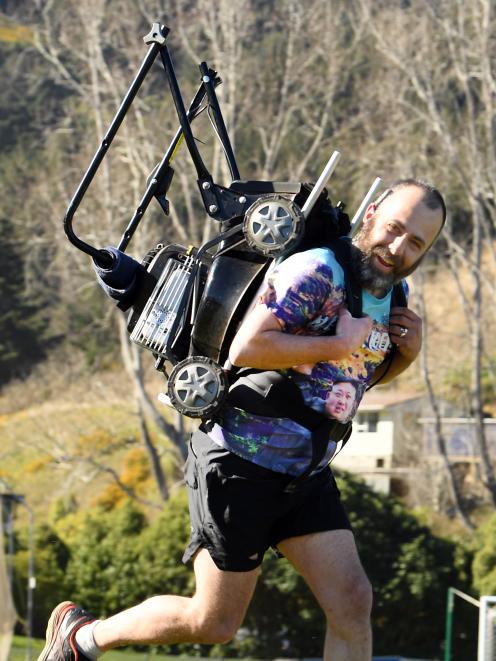 Andrew Glennie is preparing for the Northburn 100km Ultra race, when he will carry a lawnmower strapped to his back. Photo: Stephen Jaquiery
He has attracted a lot of comments from other runners about cutting corners, and mowing down the opposition.

''I'm pretty sure whatever you do with a lawnmower on your back is a world record.

''It's not something you see every day. I think people probably think it's a bit strange.''

Mr Glennie admitted he had not sought medical advice on the effects of running with the lawnmower, which he estimated to weigh about 20kg.

He said he knew he probably would not like what he heard.

After running 100km with the lawnmower he suspected he would be ''pretty over it'', but did not know for certain yet.

''Once I set my mind to doing something stupid, it's hard to talk myself out of it.''

Mr Glennie, a child and youth mental health worker, said he was inspired after talking to a race organiser who once ran around Mt Ruapehu with a lawnmower for a fundraiser, but he still had ''no solid reason why'' it appealed to him so much.

If he completes the Northburn in March, which includes a 20km ''death climb'', within 30 hours, race organisers said he can have his money back.

The mower had made a big difference to his running time at the Park Run, adding about 11 minutes 30 seconds to his usual 26 minutes.

While most of his training had been at the Park Run, last Saturday he took part in the Great Water Race in Naseby, timing out at 20km. He was unconcerned, saying he had had issues with the pack straps.

He planned to take part in other races this year with the mower, including ''Crush the Cargill''.