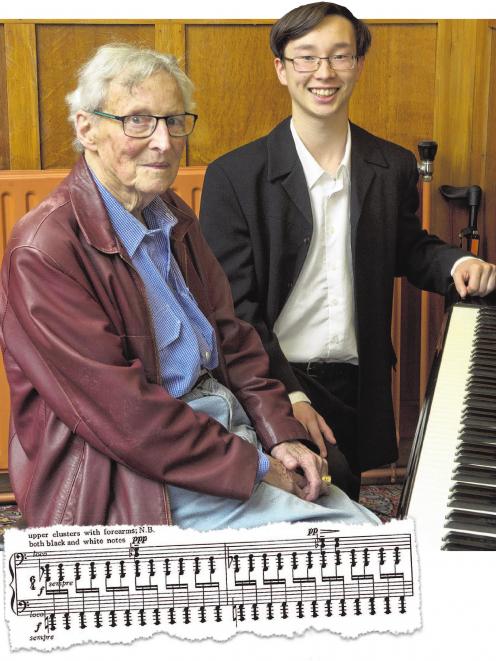 Nonagenarian Dunedin piano teacher Eli Gray-Smith and his pupil Emmanuel Keane, who has become the youngest candidate to be awarded a fellowship from the St Cecilia School of Music. PHOTO: GERARD O'BRIEN
A Dunedin teenage piano virtuoso credits his 94-year-old piano teacher for his success.

Emmanuel Keane is the youngest person to be awarded a fellowship from the St Cecilia School of Music, in Australia.

Instrumental in his success, the 17-year-old said, were the lessons he received from his teacher Eli Gray-Smith.

Emmanuel said he could not remember his first lesson with Mr Gray-Smith, at age 5, but over the years his teacher had become one of the biggest aspects of his life.

The teenage pianist, who had won music prizes as a pupil of King’s High School, said he loved starting from scratch and learning new pieces, and he loved to play, especially for others.

"It’s hard to describe, I don’t exactly know myself, I just really love to play and to perform."

The programme for his 70-minute examination recital at Mornington Methodist Church late last month was draining both physically and mentally.

The contemporary, at times obscure, repertoire required dazzling technique; it called for him to play with his forearms and fists as well as his fingers.

But there was also an imaginative aspect to the performance, he said.

Without it, he would be playing notes without any expression, "without putting, really, the heart into it".

Mr Gray-Smith said he did not see the boy’s talent immediately, but over the years "it grew".

His concentration was very good and he learned quickly, he said.

And while he took some credit for developing the young performer’s musical taste, he was generous in his praise.

All three were unanimous in their decision to grant the fellowship, he said.

The fellowship diploma was evidence of outstanding ability.

Mr Tyson confirmed Emmanuel was the youngest candidate to be awarded a fellowship from St Cecilia.