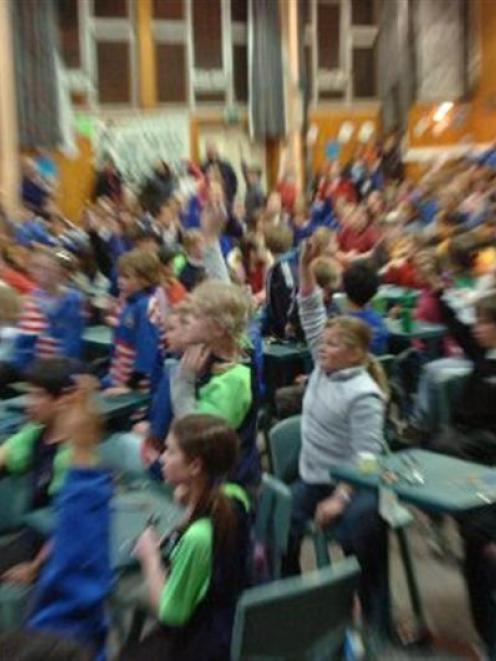 Mornington School team-mates Zoe Paterson Smith, Lara Nicholson and Alex McLeod (all aged 10) were quite clearly stunned by the result.

Once the shock had worn off, excitement grew and Lara was amused at the prospect of sharing the good news with her mother.

"Mum's never going to believe we won tonight. This is so awesome - it's unbelievable."

Alex said the word which separated them from second equal-placed Anderson's Bay School No1 and Fairfield School No1 was "foreigner".

"We had a bit of a discussion about whether it was `i' before `e' or not. But we worked it out," he said.

There was double delight for two competitors in the Year 7 and 8 competition.

Dunedin North Intermediate No 4 team members Matthew Scadden (12) and Sean Stenhouse (12) teamed up with Blake McAlevey-Scurr (12) to win the category.

For Matthew and Sean, it was the second time they had won an Otago Daily Times Extra! Spelling Quiz.

"It feels even better the second time around," Sean said.

The boys beat three teams of girls who finished in a three-way tie for second place.

Extra! editor and event co-ordinator Ivan Behrnes said the event was once again well supported with 58 teams entering the Year 5 and 6 competition and 68 teams in the Year 7 and 8 competition.