Working through a tangle of red tape 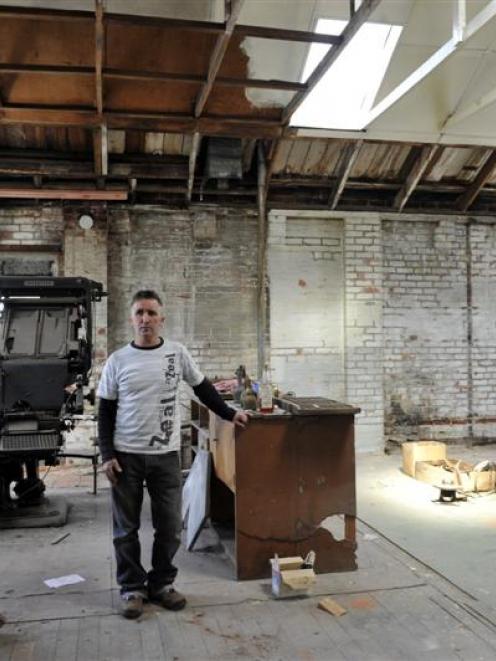 Lawrie Forbes sees space for an apartment where others see only the ruins of one of three Rogan McIndoe Print buildings in Dunedin. Photos by Peter McIntosh.
Lawrie Forbes has big plans for the dusty, desolate building standing at the back of his Crawford St site in Dunedin.

He also has a fair idea of the headaches involved in rebuilding its shattered shell, both physically and while wading through a tangle of bureaucratic red tape.

He took the Otago Daily Times on a tour of the building last week, one of three 118-year-old Rogan McIndoe Print buildings nestled on the site between Crawford, Jetty and Vogel Sts.

The interior has been stripped except for piles of building materials to be recycled, and a temporary-looking staircase leading up to a second floor landing.

Upstairs, only a few scattered remnants of the building's past remained, including an old linotype machine, and beer bottle caps hinting at late-night strategy sessions.

There are also rotten holes in the floor, where moisture has seeped in and caused timbers to rot, and temporary steel frames hold up weak points in the building's walls and ceilings.

A large crack runs down one brick wall, and the musty smell of dust permeates the space.

It is a building some might see as a target for a bulldozer's affections, but Mr Forbes looks around and sees an apartment upstairs one day and "something else" - possibly retail - in the space below. 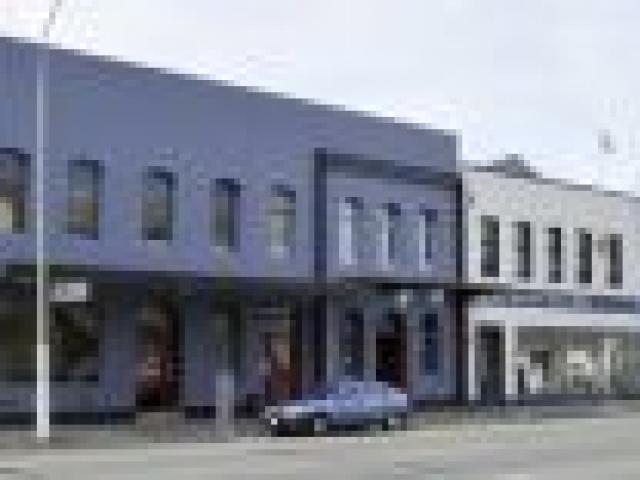 Two of the three 118-year-old Rogan McIndoe Print buildings viewed from Crawford St in Dunedin. The third building, which Lawrie Forbes plans to convert to an apartment and possible retail space, sits to the rear of the site.
It is the same vision that has already transformed one of the two other buildings on the site into a home for two tenants, Agility Logistics and PhysioPlus, as well as an apartment upstairs Mr Forbes now calls home.

The results are impressive, with Mr Forbes' upstairs apartment making the most of the building's refurbished brickwork and fittings, while benefiting from new ventilation and fire systems, a new roof and earthquake-resistant steel beams.

However, it is a project that has not proceeded without its share of headaches for Mr Forbes - mostly suffered while grappling with Dunedin City Council planning rules.

His struggles hit the headlines last March, when he parked a 1951 Ford Perfect outside the building, along with a sign saying he was selling it to raise money to pay council consent fees, in protest at the council's rules.

At the time, he argued the council's large-scale retail zoning for the area made smaller retail developments such as his almost impossible - essentially encouraging him to demolish the buildings and start again.

Having started work without consents, he was told he would have to apply for retrospective resource consent, meaning he faced a bill for consultants topping $40,000.

That was despite replacing the building's roof to protect the structure, thus preventing demolition by neglect, he said.

"By doing something, you actually become the target to be picked on.

"We are the pioneers, and pioneers always get shot at.

"We have got to take a few bullets, but it means everyone else gets to settle."

He has other pet peeves as well, such as the rule banning inner-city apartments from having windows that opened on to the street - to protect against noise pollution - which required expensive ventilation systems to be installed in each room.

He was also forced to again resort to consultants and lawyers after being told his building had lost its "existing use" right to use part of the building for office space, because the space had been vacant for more than 12 months.

That was despite the building having housed an office for more than 100 years, he said.

It was a battle Mr Forbes won, but one that helped convince him the system was making it difficult for building owners.

He and business partner Craig McNaughton, of One Zeal Ltd, bought the buildings as leasehold properties in August 2008 for $535,000, which, with hindsight, he admits was probably "$85,000 too much".

That was because just 21 days later the Rogan McIndoe Print company was broke, having occupied the site since 1893, and Mr Forbes was facing a future without a tenant or income.

After some rapid planning, the decision was made to split the site back into separate tenancies, with a slightly younger lean-to building, built in 1919, removed from the site in 2009 to free up space for "the secret" to the site's future - a car park.

There was space above the logistics company for another tenant, possibly a company in search of office space - and a two-storeyed building on the corner of Jetty and Crawford Sts awaiting development when the right tenant was found.

However, it was the last of the buildings, the two-storeyed, 400sq m space on the Jetty St side of the site, that presented the greatest challenges, Mr Forbes believed.

It was considered to be in the worst condition of the three buildings, and already $8000 had been spent securing the roof and walls and installing a new fire detection system, he said.

The next step would be to identify a possible tenant and begin discussions about what they might need, before employing a designer to prepare "sympathetic" plans for the building's refurbishment that suited the tenant, Mr Forbes said.

The challenge was to strike a balance between retaining historic features and making the building fit for purpose, he said.

"The worst thing is to try and make things look like they used to, absolutely perfect, and try too hard. It looks artificial."

Mr Forbes said tenants would pay more for the site than other newer buildings, but received a "substantially better" premises in return.

The trick was to weed out the pretenders to find the perfect tenant, which were signed for multi-year leases with rights of renewal, he said.

"I'm quite picky. I just know when it's the right one.

He planned to take a break from developing the building to continue work at his other company, Zeal Steel, getting more cash behind him before continuing the project once the right tenants were identified.