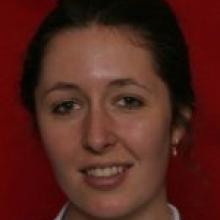 Laura Gilkison
Her eyes stared longingly at the trays of bread.

She willed the other beggars to stay away, so she could just get one loaf.

She was so weak; she could never fight for the bread.

The baker collected his trays and moved outside. Glancing sideways he dropped them in the bin.

The beggars were rats, scuttling in from their hiding holes in the shadows. Tearing over the scraps left behind, they disbanded and were gone.

She had failed. Creeping from the corner, she looked for a lonely crust. There was nothing.

The door was shoved open, a loaf of bread thrown at her landing with a thump. The edges were burnt and mould grew in large patches.

"Get off my doorstep, you piece of filth."

She stumbled to her feet, weak with a mix of hunger and fatigue.

She clutched the precious load in her bony arms, walking away to a hidden spot in the streets.

She sat by a broken sign on a street swallowed by darkness.

The sign might have been bright once, you could almost see the colours that now hung in strips. The girl called out, no more than a whisper.

A woman crawled from behind the sign. Her body creaked and groaned as if it had broken down.

Her hair fell in clumps around her face and her eyes spun wildly.

"Food," she demanded, her eyes zoning in on the girl's small loaf.

The girl held it out. Her mother snatched at it greedily, barely pausing as she stuffed as much as she could into her mouth.

Bite by bite, the loaf shrank but still the girl did not move.

Not until the final crust fell on to the concrete by her feet - she placed it into her mouth.

She walked and walked, stopping at last outside a small house.

A family sat at the table eating their supper.

Her mouth salivated. The smell filled her aching stomach as she rested against the window.

She closed her eyes unaware of the other little girl's stare.

It was Mia, a head full of red hair, bright green twinkling eyes.

She was a happy child. She lived with her little brother Toby and her Mum and Dad.

The girl outside was skinny, small - so small the shadows seemed to overpower her.

Long black hair covered her dark skin. Her eyes made Mia notice her. They were eyes that looked like her Granny's.

They were the eyes of someone who had seen too much.

Mia looked at the plates of food and felt sick.

"Dad, do you see that girl there?" she asked.

He ignored Mia. Instead he walked over to the door, locked it with a click, and closed the heavy, red curtains.

"You invite vermin into your house and you end up with fleas," he scoffed.

"Come on Mia, it's getting late.Time for bed."

"No. She looks hungry. Where's her mum? Dad, you could at least find her mum!"

She paused and looked up at him.

He looked at her shocked, and then burst out laughing.

Mia smiled and climbed the stairs.

He tucked Mia into bed before pulling her curtains shut. She would be gone by morning and Mia wouldn't know a thing.

The girl lay outside the window, the sharp wind slapping her awake. She stumbled to her feet and made her way to her mum's hiding hole.

She tried to slip behind it, before being abruptly shoved out.

"There's not enough room, go away," her mum croaked.

The girl curled into a ball, letting sleep wash over her, bringing with it a new day.