Poll: Should Aucklanders pay for their own roads 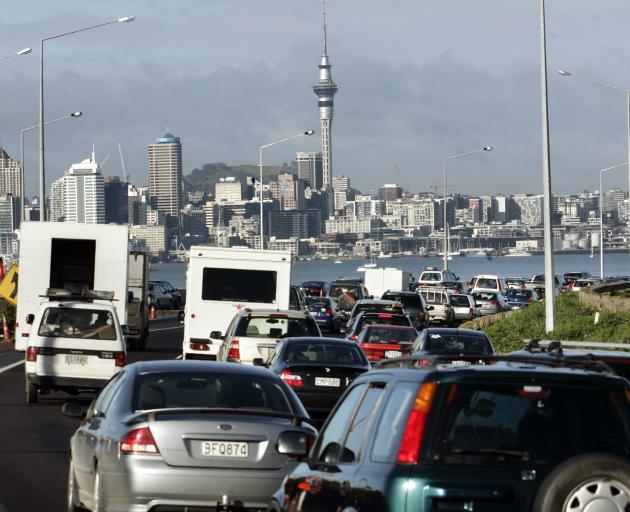 The new Labour-led Government will introduce a regional fuel tax on Auckland motorists to help fund a multibillion-dollar investment in trams to the airport and West Auckland. Photo: NZ Herald

The new Labour-led Government will introduce a regional fuel tax on Auckland motorists to help fund a multibillion-dollar investment in trams to the airport and West Auckland.

Incoming Transport Minister Phil Twyford confirmed to the New Zealand Herald last night that the coalition will make an immediate start on modern trams to Westgate as well as trams from the airport to the Auckland CBD.

The plannned tax has prompted outrage from some Herald readers, with some motorists are threatening to fill up out of town, and even leave the city, to avoid a new regional petrol tax expected to be 10c a litre.

Gavin Logan of Avondale said: "No I will not be happy to pay this tax if it is introduced and will make sure that every time I am out of the Auckland Council area that I fill my car to the max to avoid as much of this tax as I can."

Jason Churchill, who owns his home in Waiuku and works locally, said he would consider moving just over the border into the Waikato District to avoid the tax.

"We did not choose to be part of Auckland and these trams will not benefit my life one bit I am dead against it," he wrote. "If the fuel tax didn't include us I would probably stay."

Twyford and Prime Minister-designate Jacinda Ardern have also confirmed the Government will change the law to allow Auckland Council to introduce a regional petrol tax, likely to be set at 10c a litre.

The new Labour-led Government will introduce a regional fuel tax on Auckland motorists to help fund a multibillion-dollar investment in trams to the airport and West Auckland.

Twyford and Prime Minister-designate Jacinda Ardern have also confirmed the Government will change the law to allow Auckland Council to introduce a regional petrol tax, likely to be set at 10c a litre.

"If and when Auckland Council request the regional fuel tax we will legislate the mechanism as a priority," Twyford told the Herald.

Auckland mayor Phil Goff - and his predecessor Len Brown - have long been pushing for a regional fuel tax to boost the council's constrained budget for new infrastructure.

National refused to introduce the tax, campaigning against its introduction during this year's general election, but instead eyeing road charges to help tackle Auckland's crippling congestion.

Twyford said Labour was proceeding with its policy of modern trams, also known as light rail, from the CBD to Westgate in West Auckland within 10 years.

The confidence and supply agreement with the Greens included the $3 billion tram project from the CBD and up Queen St and down Dominion Rd to Mt Roskill where it will join SH20 to the airport, but did not mention trams to West Auckland.

It is understood the tram route will go up Queen St and via Great North Rd to Pt Chevalier to join the Northwestern Motorway to Westgate.

Ardern's first public appearance as Labour leader was to announce the party would spend $5b to build tram lines from the Auckland CBD to the airport and West Auckland within 10 years, and complete the first leg of the airport route to Mt Roskill by 2021.

"We are proceeding with the policy we campaigned on, that is to building light rail from the CBD to the airport, and to West Auckland, starting immediately," Twyford said.

National refused to introduce the tax, campaigning against its introduction during this year's general election, but instead eyeing road charges to help tackle Auckland's crippling congestion. Photo: NZ Herald

"One of my first actions as minister will be to have officials advise on how quickly we can start, and how soon we can get it [light rail to the airport] built. I would expect Queen St to Mt Roskill within four years as a minimum. If we can do it faster we will."

The Te Atatu MP, who also has the portfolios of housing and urban development and largely shaped Labour's policies for Auckland, said he would be talking with Auckland Council about the regional petrol tax to get timeframes in place.

He said one of the Government's first steps would be to sit down with the council and renegotiate a joint government-council 10-year transport plan, known as the Auckland Transport Alignment Project (ATAP).

"It is a major priority for us to start immediately to roll out the rapid transit system for Auckland. To do this we need to have the funding commitments in place, including the regional fuel tax," Twyford said.

Auckland mayor Phil Goff - and his predecessor Len Brown - have long been pushing for a regional fuel tax to boost the council's constrained budget for new infrastructure. Photo: File

Barney Irvine, the Automobile Association's principal adviser for infrastructure and motoring affairs, said the AA's members are open to the idea of a regional fuel tax for such a project but he believes the new Government is "getting a bit ahead of themselves".

"This would mean introducing a new funding stream for a project that doesn't even have a business case," he said.

"In principle we have no problem with a regional tax for this project, especially the connection to the west, but our members would want to see the merits clearly laid out before they start paying 10c more per litre or whatever is proposed."

Aucklanders should also get a say, Irvine said, suggesting they could be asked as part of the council's Long Term Plan consultation early next year whether they would prefer a fuel tax, rate rise, targeted levy or some other option to fix the city's congestion.

Phil Goff is returning from a trip to Europe where he has been looking at transport and housing issues and could not be reached for comment.

New Zealand needs to pay for more Auckland roads. North Island roads are generally abysmal. We drive to Christchurch in little over 4hours. Yet you're Lucky to get across Auckland in a quarter of that time. Head north on the so called Holiday highway for an hour State highway suddenly becomes a small country lane that meanders to Whangarei. To Tauranga is not much better. Even to Hamilton doesnt have a dual lane all the way. Auckland is strangled it costs NZ millions of dollars everyday. It is false economy just to charge Aucklanders, in the end it costs all New Zealanders. Our biggest city cannot be strangled. To house and employ properly we need roads and fast railways to service Auckland to it's satellites. At the moment Auckland is 20 years behind the times. Lets get on and build them.

Simon, we get that distance in 4 hours because of people, not road conditions.
Our roads are shocking compared with up there (northland the exception) congestion causes delays, not 'poor quality roads'
People choose to live and move there, there problem, not ours