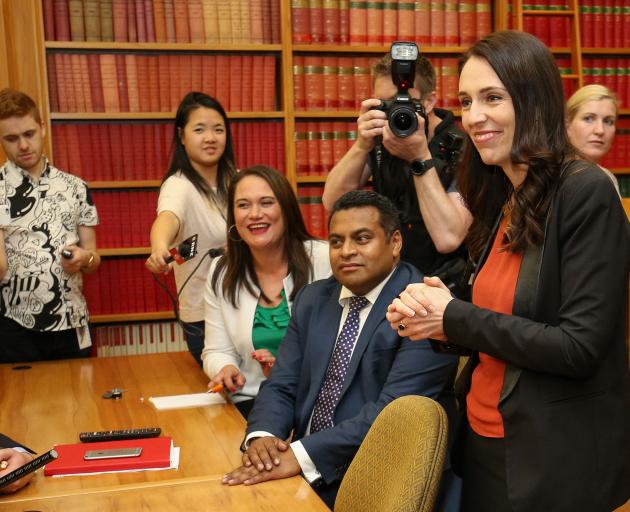 Labour leader and prime minister-elect, Jacinda Ardern, speaks to her MPs during a caucus meeting at Parliament. Photo: Getty Images

Labour is holding its first caucus meeting since learning it will lead the next Government - with Prime Minister-elect Jacinda Ardern telling her MPs they have been gifted an opportunity by the people of New Zealand.

After entering the room to a standing ovation, Ms Ardern said, "this will be a Government of change".

"It will be a Government we can be proud of. And this will be a moment in time that I hope all of us look back on with immense pride. With a sense of honour and privilege. Because we have been gifted by the people of New Zealand an opportunity. And it is for us to make the most of that," Ms Ardern said, to "hear, hears" from her colleagues.

"In these negotiations and through this period we have stayed true to who we are. And we have found allies in this Parliament who wish to join with us in building a fairer New Zealand.

"A country where our environment is protected. Where we look after the most vulnerable. Where we support our families. Where we make sure people have the most basic of needs like a roof over their head."

Ms Ardern thanked Labour's MPs for their patience during negotiations, and noted their restraint - none had contacted her asking what was going on.

Today's meeting comes after New Zealand First leader Winston Peters announced last night that his party would enter coalition with Labour, with the Greens backing Labour on confidence and supply.

The Labour caucus will today elect its members to the executive of the incoming government, but will not assign them portfolios yet. Four places will go to NZ First MPs while they will also have a Parliamentary under-secretary.

Mr Peters has been offered the deputy prime ministership. The Greens will get three ministers outside of Cabinet and an under-secretary.

On the way into the meeting, Labour MP David Clark said it would be a "privilege" to have the health portfolio.

"The challenges there are huge and I think anybody who underestimated the challenge in the health area would be foolish. It would be a tremendous privilege to serve in that area, if I was given the opportunity.

"We don't come here to warm seats. Certainly I've come here because I want to make real change that's meaningful for New Zealanders, and so the thought I might be able to be a part of that is pretty exciting."

Chris Hipkins said he would like to be a minister, but would not comment on whether he wanted the education portfolio, saying it was a matter for the leader and caucus.

Jenny Salesa said it would be "fantastic" to be a minister, and she would love the associate education portfolio.

Asked if he wanted to be a minister, Michael Wood said: "I'll leave that to the wisdom of my colleagues and leader. I just want to be an effective team player in my caucus."

Stuart Nash declined to say whether he wanted to be Police Minister.

"There's a process we have to go through to determine who's going to be in Cabinet, and after that I think the leader determines what portfolios we're going to take.

"I'd do anything that Jacinda asked me to do.

Labour expects to sign-off the separate agreements with NZ First and the Greens early next week, and then release the detail including policy agreements.