0 Comments
The number of Covid-19 vaccination doses in New Zealand should hit the half million mark in the next two weeks, Minister for the Covid-19 Response Chris Hipkins has revealed.

The minister was joined by Director-General of Health Dr Ashley Bloomfield in a media briefing in Wellington this afternoon.

Hipkins said that as of midnight, 388,877 doses of the vaccine have been administered, an increase of 83,000 on the same time last week. He added that 120,000 of those people have received their second dose.

"Overall, we're tracking ahead of plan. Based on these statistics we're expecting to hit the half million mark within the next fornight."

He acknowledged healthcare workers, vaccinators and district health boards for their efforts in the immunisation programme.

The national online booking system is heading through the trial well, Hipkins said, adding it will support and in some cases replace local existing booking systems as the programme scales up.

"I know in these early stages there will be some teething troubles, there will be people who arrived to be vaccinated who might experience difficulties, particularly at some of those bigger centres where they are delivering vaccinations to thousands of people a day."

He emphasised that the priority was for eligible people who had already booked in an appointment to get the jab.

"Where people are walking in to get a vaccination, we still do expect that will be done broadly in line with the sequencing framework.

"So my message to people who are in group 4 - which will be the last group to get underway - please refrain from walking up to a vaccination clinic at this point." 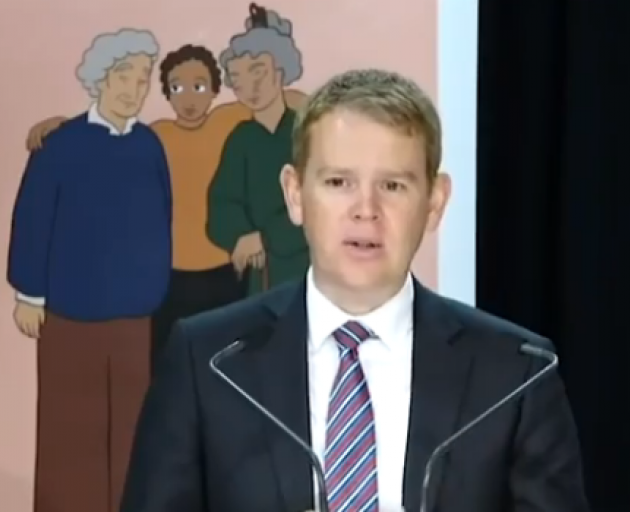 Chris Hipkins emphasised that the priority was for eligible people who had already booked in an appointment to get the Covid jab. Image: NZ Herald
Hipkins said walk-ins can be useful in instances where booked people did not show up to their appointment.

"We've seen some limited examples where there have been challenges. There was a story in the last 24 hours, which I think was very unfortunate of an elderly woman who was unable to get vaccinated despite having made an appointment."

He said the framework for when groups would get vaccinated aimed to help manage demand.

"The sequencing framework talks about when people can start getting vaccines, it doesn't guarantee they'll be able to get one exactly when they want to.

"We simply won't have the supply to give them to everybody all at once. We could've had a more granular system, but that would've been more complicated."

Group three is larger than the number of vaccines available through to the end of June, he said.

"So not everyone is going to get one straight away. The ultimate determinant of when we finish [vaccinations] is going to be availability of vaccines."

He said some DHBs were adopting a locality-based approach and that was sensible and efficient.

Bloomfield said the number of trained vaccinators in New Zealand has been increasing, particularly over the past two weeks.

Yesterday, Bloomfield told RNZ that older people and those with pre-existing conditions were becoming the focus of the vaccination campaign.

He said DHBs had been told which underlying health conditions would mean people should get an earlier vaccination.

An initial list was based on the conditions used to be eligible for the free annual flu vaccination, he said.

The list was then updated and extended weeks ago with overseas evidence about underlying conditions.

It would be further updated this week, and was available on the ministry's website, he said.

One new case in managed isolation

There are no new cases of Covid-19 to report in the community in New Zealand today and just one new case in managed isolation.

The person arrived in New Zealand from Thailand via Singapore on May 7 and is in isolation at an Auckland facility.

The Ministry of Health’s current assessment is that the public health risk to New Zealand from the Melbourne community case announced yesterday is low.

At this stage the Ministry is recommending that Quarantine-free Travel, between New Zealand the state of Victoria can continue with certain additional precautions in place.

From what we know so far - based on information from Victoria health authorities - the case is linked to the Australian border, and there is a limited period where the person was considered infectious while in the community in Melbourne with a modest number of locations of interest  (12 listed on Victoria’s Department of Health website at 10am this morning).

Anyone who was at one of these locations of interest at the specified time cannot travel to New Zealand for 14 days from exposure.

Anyone already in New Zealand who has been at a location of interest during the time specified, must self-isolate, call Healthline and arrange a test if  advised to do so.

The Ministry's contact tracing team will be contacting by email roughly 4500 passengers by who recently travelled from Victoria to New Zealand to remind them of the above measures.