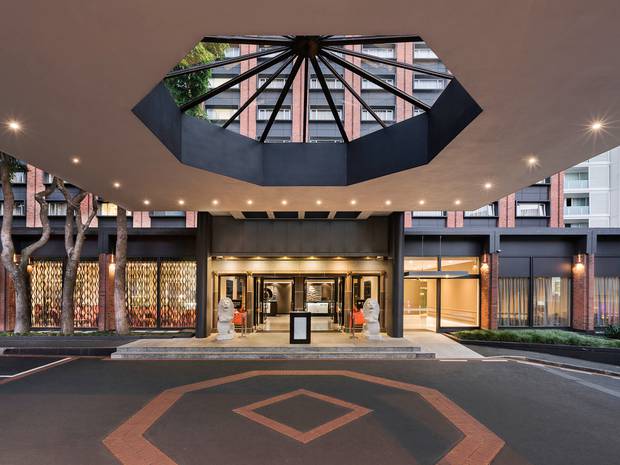 The Pullman Hotel in Auckland. Photo: NZ Herald
A woman who allegedly scaled two fences to escape from a managed isolation facility in Auckland has appeared in court and been bailed to a Dunedin address until her next appearance.

She was the first of four people last week to leave a managed isolation facility before they were legally allowed.

it's alleged that, on Saturday, June 4,  Derrett absconded from the Pullman Hotel on foot shortly before 6.20pm.

She was located soon after a couple of blocks away on Anzac Ave at 8pm.

Derrett appeared before Judge Christopher Field this morning in the Auckland District Court on one charge of failing to comply with a Covid-19 order.

After applying for legal aid, and spending much of the morning waiting to be assigned a lawyer, Derrett's case was finally called after midday.

She sat in the back of court wearing dark sunglasses and was supported by her brother.

The court heard Derrett has finished her isolation period and been tested twice for Covid-19, with both returning negative results.

"She was absent for a very brief time... on day seven," her lawyer said today.

A medical report was presented to the court outlining mental health issues relating to Derrett.

She wanted to return to Dunedin with her brother, who had travelled to Auckland for her appearance.

Her lawyer opposed media applications to photograph Derrett in court and sought a remand on bail without plea. She has been on bail since her arrest with no issues.

Judge Field allowed her to travel to Dunedin, but said she must appear in the Auckland District Court later this month.

Derrett was taken out a back door at court, avoiding the main and only public entrance and waiting media. She declined to comment when approached.

Five officers who came into contact with Derrett while capturing her had to undergo Covid-19 testing and go into self-isolation for two weeks.

Meanwhile, The New Zealand Herald has also learned that on April 20, Derrett was reported missing in Queensland.

Police there had appealed to the public for sightings after she was last seen leaving a health facility in Nambour on the Sunshine Coast, about 104km north of Brisbane.

It is unclear if police in Queensland located Derrett before she left Australia to come to Auckland.

Every person who arrives in New Zealand must be isolated from other people for a minimum period of 14 days.

They must also test negative for Covid-19 before they can go into the community.

This 14-day period forms a critical part of the actions being taken to keep New Zealand and Kiwis safe during the global pandemic as case numbers are continuing to increase overseas.

Of those, the "vast majority" were adhering to the rules and taking their responsibilities seriously, he said.